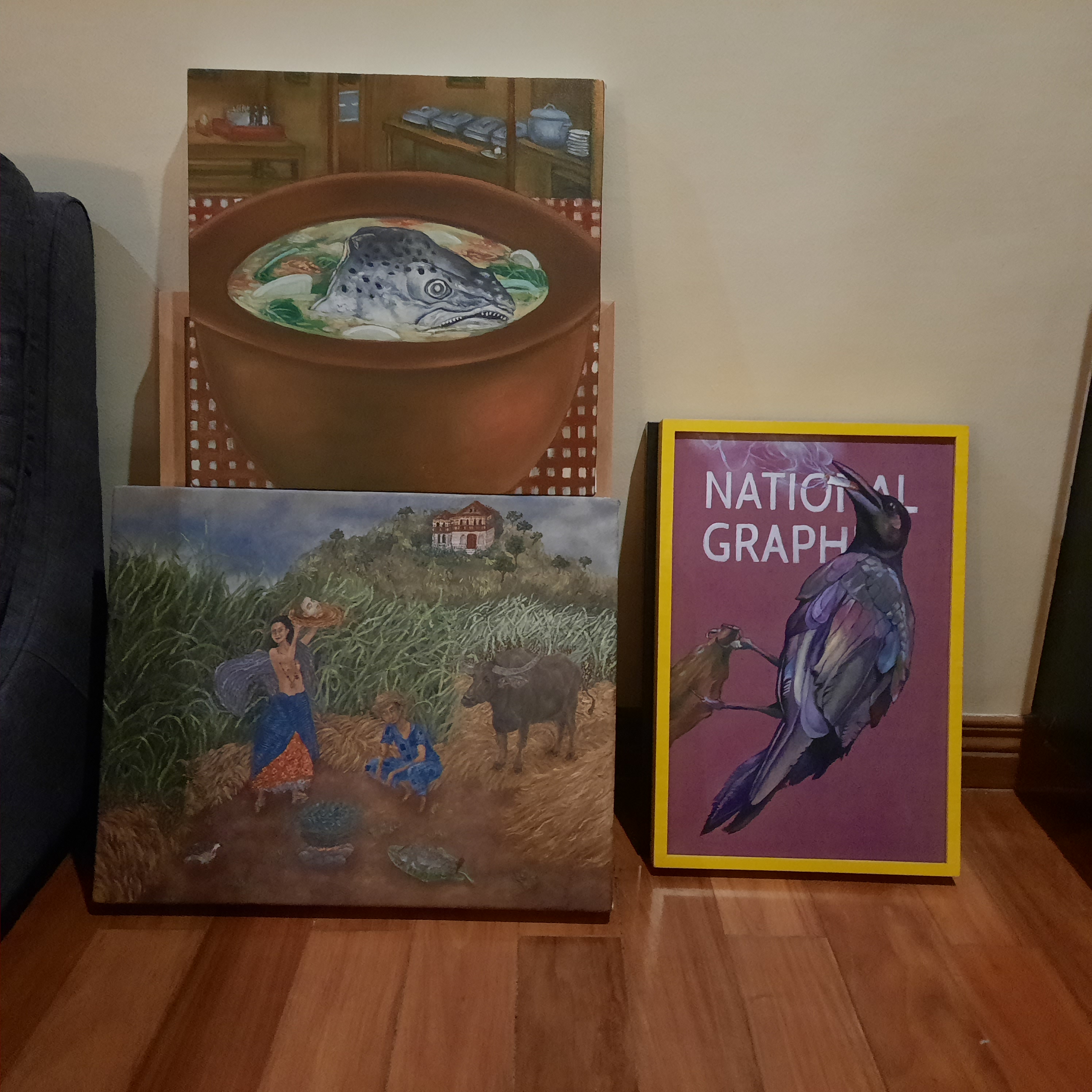 Three Paintings and The Blues

My first encounter with these 3 paintings happened almost simultaneously around early 2022. It was then that I realized that these works reminded me of what it’s like to feel the blues. Some days are simply better than others. I listen to a lot of music where the blues, as a music genre, is a core component heard time and again and to me, "the blues" equates to something that is neither joyful nor tragic. The kind of blues I’m referring to is not sappy. It’s a matter-of-fact and easily identifiable like running into something unpleasant on the news.

You know it’s a black crow. You see a dead fish's head. You see someone topless with a human head on a platter and automatically think that’s some dark stuff. Similar to great poster art where the text is “viewed” and not just “read’ and wherein visuals are “read” and not just “viewed”, there is nothing vague in these 3 works by Robert Langenegger, Victoria Yujuico Keet, and Tin Garcia.

As seen in CROW by Tin Garcia, what could have remained a wreck in the mind is turned into a solitary and brooding bird. Personally, this work, which feels both comic and stoic, is a natural trigger for me because it depicts one of my favorite things in the entire world—smoking cigarettes. While I quit smoking years ago I never really got “over it". It’s like grieving for a loved one, you are never really "over it" but life still goes on. Maybe one day I will smoke again but not soon. In other words it’s a complicated personal matter. That being said, I don’t exactly feel the impulse to smoke right away with this work. I'm also not into crows. The trigger I'm referring to contains no emotion but rather, a knee-jerk reaction in the spirit of something that does not wish to please anyone besides the seriousness of its subject matter, successfully delivered without frills or any distraction. It is like a fight-or-flight response—-what is necessary is the ability to assess a situation rapidly, make calculations, then pursue action. Without drama, Tin’s work shows that abstract concepts can evoke a stinging heartache. Then just when the world seems to start being too bogus for me, pure logic sets in: OK, it’s a black crow smoking a cigarette and the entire thing looks like a National Geographic magazine--- now what? It is this tension that accounts for the work’s charm and uncertainty. This for me is like a suitable private therapy of some sort that permits me to brood from morning till evening at peace.

The Great Migration of Alaskan Salmon Heads Into Asia

As far a subject matter is concerned, Robert Langenegger’s works give new meaning to the wicked, dark, and unreasonable. This particular piece, SINIGANG, is a mere snippet compared to his much larger, ambitious, immense and neatly executed works that I have seen exhibited in many galleries in recent years. When first viewing a work by Langenegger, one must have stamina in mind and body because they could be visually absurd—at least in terms of the grand and epic. Yet in SINIGANG, we see another side to his output in that the concept of “to kill or be killed” exists beating with a heart and a rhythm of its own, even if the subject matter is simple and done on a smaller scale. Every Langenegger work seems to have remnants of an umbilical cord still attached to the artist. Even if I consciously try not to take it too seriously (at least for this work because for some reason it also makes me hungry) the significance of what is depicted here, the vibes are real and it reminds me that such is the wonder of painting. Unfortunately, we can’t trace where this fish could have come from, how mind-blowing the ocean the fish could have originated from, and other creatures that were possibly with this fish. We also don’t know when this fish was caught. Then of course there's that small strip of scenery in the upper portion of the painting giving a clue that there must have been a culinary intent during its conceptualization. It’s almost as if Langenegger was in denial about the fish’s ultimate mortality. We are therefore compelled to judge not morally but aesthetically. And as with other works by Langenegger, whether this scene was a result of rational design-making processes or isolated realities he was experiencing, we will never know for sure.

In Victoria Yujuico Keet’s SALOME, I am reminded of the disturbing reality that the human psyche can never truly be governed by ethical codes (which humans themselves labelled in the first place) that most of us seek to observe in our ordinary lives. I am reminded of the training taught in classical music performance wherein the performer must “deny” one’s personality to take up the composer’s. While not all may agree to this, in one way or another there is truth to this because there are many dimensions to being a human being and stretching the possibilities of what one can express is for me, still a most respectable aspiration. Respectable because indifference is an enemy in art—at least if your intent is to emotionally charge and propel your way through the waves of life and what it means to feel alive. In this work SALOME, there seems to be an intent of evoking from the viewer some kind of psychological response. If being guided by the narrative with respect to the title (You can google the story of Salome which is your not-so-typical disturbing biblical tale) the work depicts distress. The details however, reveal infinite possibilities. Is the house in the background the Marcos twin-mansion in Laguna? The people depicted look quite well-dressed for a beheading to take place? Looks like it is about to rain and it’s very humid? There is zero impression of sunlight in the painting.

In 19th century western Romanticism, the awareness of the duality of human beings is vital. Whether the medium is an opera, a novel, or a series of etchings, by highlighting tenderness vs. cruelty, love vs. hatred, forgiveness vs. vengeance and so on, we see that by expressing more than one emotion at the same time, a strange enjoyment can be found in spite of the ruthlessness and scandal of what is depicted. Being rational is one thing but it’s another thing to free oneself from the constrictions of ethics and savor what it feels to be in a delirium of pure madness. I have not seen much of Keet’s works but so far, it is her smaller, more intimate works that draw me in the most. They are somewhere in between an exercise in portraiture and a loose interpretation of social ills.

Can painting be used as an outlet to commit a crime formed in one’s mind? But in art, the only crime would be to let fear, doubt and dishonesty rob oneself of foresight and the opportunity to release tension. These 3 paintings remind me of the famous quote usually attributed to Aristotle that says "It is the mark of an educated mind to be able to entertain a thought without accepting it". After all, this is painting and life goes on with or without them.

Paintings don’t feel pain. They’re meant for one thing and one thing only, to be used by their master-- the painter. Doubt leads to death.