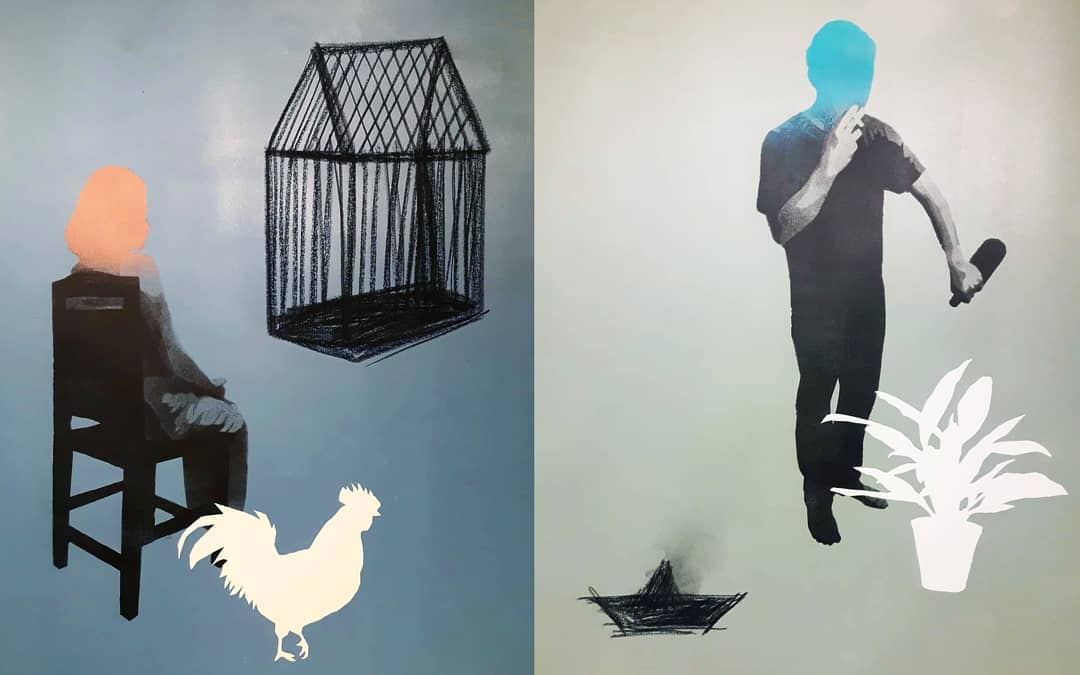 Through a mix of photography, printing, and painting, Filipino artist Mark Copino creates dream-like and minimal compositions that tread the line between figuration and abstraction. Produced with a deceptively simple image making device called stenciling, each of Copino’s pictures are imbued with a clean and precise graphic elegance.

It was with the street art collective called UBEC Crew that Copino, also known as Elias Kidlat and KDLT, found the freedom to experiment, giving rise to his current methods and imagery. Often using shapes and photos of people and domestic settings, objects, routines, Copino invites viewers to quietly contemplate homely spaces and memories. These figurative elements are kept to a minimum and combined gracefully, often floating in empty planes of color.

Many of these figurative configurations are contained or organized within the generic outline of a house. As abstract color gradients, washed out photos, silhouettes of pets, fences, and brooms, and his son Elias are strategically placed within, the house outlines act like windows and lenses from which to contextualize them.

At times, Copino often breaks away from self-imposed formulas like his houses to invent fresh combinations and figures. Historical pictures and portraits with rich graphic elements, anthropomorphic houses, exploding heads, and all manner of outlines filled with his usual photographic prints and figurative compositions.

Mark Copino is a Filipino contemporary artist hailing from Cebu. He is among the founders of artists’ groups, Ubec Crew, the Junks Collective, and Asylum 38. He has had a number of well-received solo shows, in established galleries such as Qube Gallery, Block 17 Artspace, District Gallery, Space Encounters, and Stephanie Chefas Art Projects. He has also participated in group abroad, such as Art Apart Singapore, Art Kaohsiung, and Art Tainan 2018.