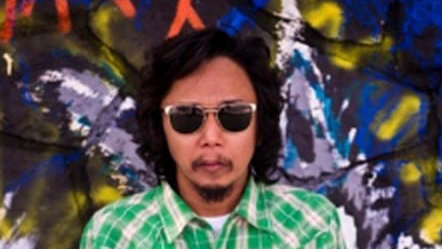 If he chooses, Jayson Oliveria could probably paint anything, in any way. Instead, he channels a keen observation and understanding of images into an indiscriminate productivity. For Oliveria, any image is up for grabs, especially the scrapheap of the internet. He manipulates, appropriates, deconstructs, or as he put it tweaks. Transposed, these images flatten out, losing value in their native hierarchies, and become part of his equations.

He reduces art to something basic, that even art history and painting is subject to ridicule. There are no masters, no styles, no manifestos, no end goals, no utopias, no idols. All content goes through a grinder. The goal is simply to paint. The method is more important than the end goal. That drive, that creative aggression, has historical precedent. One could link it to punk or Dada, as an arbitrary, unconventional, and humorous playing with form and content.

Oliveria says that there are no answers in painting. He doesn't mind if paintings are relegated and forgotten, left in the background like other decorative schlock hanging in living rooms. But whether he admits it or not, he's aware of their secuctive power or beauty. It's a power that pull-ins and overwhelms the viewer. It's an effect he often pulls off. And he does so with an honesty or self-awareness, coming through the work as humor, disgust, self-deprecation, self-questioning, and even a love or fascination for modern art.

Jayson Oliveria is a Filipino Asian Modern and Contemporary painter. Oliveria was a CCP Thirteen Artist awardee in 2006 and was among the 1st batch of resident artists of Big Sky Mind Artists Projects Foundation in Cubao from 2003 to 2004. The following year he was sent to Fukuoka, Japan for an artist residency facilitated by curator Mizuki Endo in Tetra Art Space. In 2004, he was among the first recipient of the annual Ateneo Art awards for his exhibit Instinct vs. Learning held at Mag:net QC, and in the following year was nominated for the same award for his solo show Killa Foto at Green Papaya Artists Projects. Consistently being exhibited extensively both locally and abroad, he has been featured in a handful of important survey shows such as in Nadi Gallery in Jakarta, in Tate Turbine Hall in London thru Green Papaya, in Sydney and Tasmania, in HK, in the USA and in Beijing, China.