“Sometimes I long so much to do landscape just as one would go for a walk to refresh oneself, and in all of nature, in trees for instance, I see expression and a soul….I'm in a fury of work as the trees are in blossom and I wanted to do a Provence orchard of tremendous gaiety.” -Vincent Van Gogh

On July 29, 1890, Vincent Van Gogh died of a gunshot wound to the chest. Six months later, Theo, his brother and ally throughout his life, died of a kidney-related illness. Vincent was 37 and Theo was 33.

It was Theo, an art dealer, who encouraged Vincent to cultivate his talent for drawing and start painting at the age of 30. The seven years that would follow would probably be considered the most prolific of an artist’s career. In those few years, he would produce thousands of drawings and paintings that have become central to the development of modern art

Vincent’s output in that short a time has made him one of the most revered artists of all time and one whose creative life and tragic death have been the subject of myths, films, songs, and controversies. And he has, for many, become the model of the artist struggling for artistic self-expression amidst one’s pain and poverty.

In truth, Vincent was already hailed as a visionary even during his life or shortly before his death. Before the countless reproductions of Starry Night on refrigerator doors and from Chinese modern art factories, Van Gogh had already long become recognized by his peers as a singular artist with a revolutionary grasp of painting, particularly that of color.

Vincent was first and foremost a great colorist, probably one of the greatest. Spurned on by new color possibilities presented by synthetic pigments, by the ideas of his Paul Gauguin, by color theory learned through observations of the paintings of Eugene Delacroix, and by the optical mixing spearheaded by Georges Seurat, Van Gogh pursued the expressive dimensions of color like never before.

"Instead of trying to reproduce exactly what I see before me, I make more arbitrary use of color to express myself more forcefully"

Armed with a resplendent palette of contrasting colors, Van Gogh exaggerated or emphasized emotions and sensations. This was no less than a shift in truth in painting, something that 20th century artists like Matisse, his fellow fauves, and the German Expressionists recognized. Color had become a means of expression not description.

For the Impressionists, the generation of painters who had established themselves like Monet and Renoir, truth in painting was empiricism, a recording of light’s effect on nature. With Van Gogh and those who followed in his stead, truth in painting had become something subjective and personal. Reality in painting could be distorted, perspective and space could be bent, according to personal and private inclinations.

Van Gogh's interpretation of nature in his paintings is “the animation of the landscape as a kind of reflection of the artist's emotional and psychological agitation.” Contours or outlines, that disappeared in the paintings of the Impressionists, emerged in his because he painted the landscape not as he saw it but as he felt it. He painted rapidly and with great intensity in a manner that had little to do with external reality but with his own emotive state.

This rapidity and intensity of Van Gogh’s brushwork was evident in his paintings. It is as if one can recreate how Van Gogh needed to manipulate pigments, the direction he moved, his spontaneity, and the varying pressures his brush exerted on the canvas. Van Gogh seemed to be giving clues, allowing the viewer to reconstruct his painting process in their imagination. As the artist’s gestures and bodily movements were evident in the shapes and reliefs of paint left on canvas, what else was evident? This paint, the material offers resistance, something that the artist’s will has to overcome to achieve expressive marks. Artmaking was now an activity of struggle, an idea in keeping with the myth of Vincent’s painful existence.

Images are paintings of Vincent Van Gogh done in the region of Saint Remy, at a very productive period for the painter in the two years before his death.

Included is also a painting by Paolo Icasas called "Vincent and Theo's Grave." 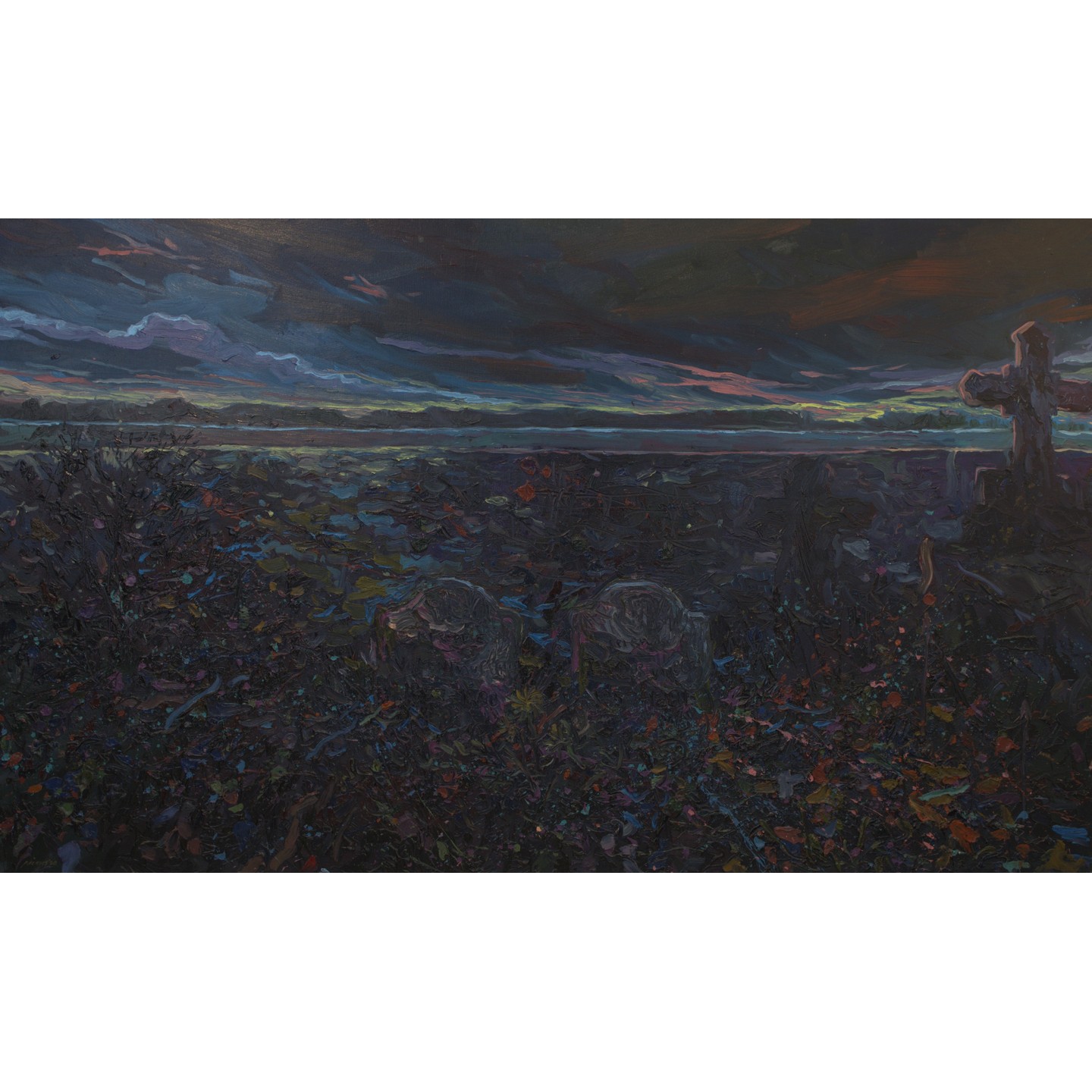 From Filipino artist Paolo Icasas is a sombrely-colored painting of the brothers Van Gogh's gravestones. The painting is like a child of Vincent's, a painting made with intense, spontaneous, expressive, and evident brushwork.