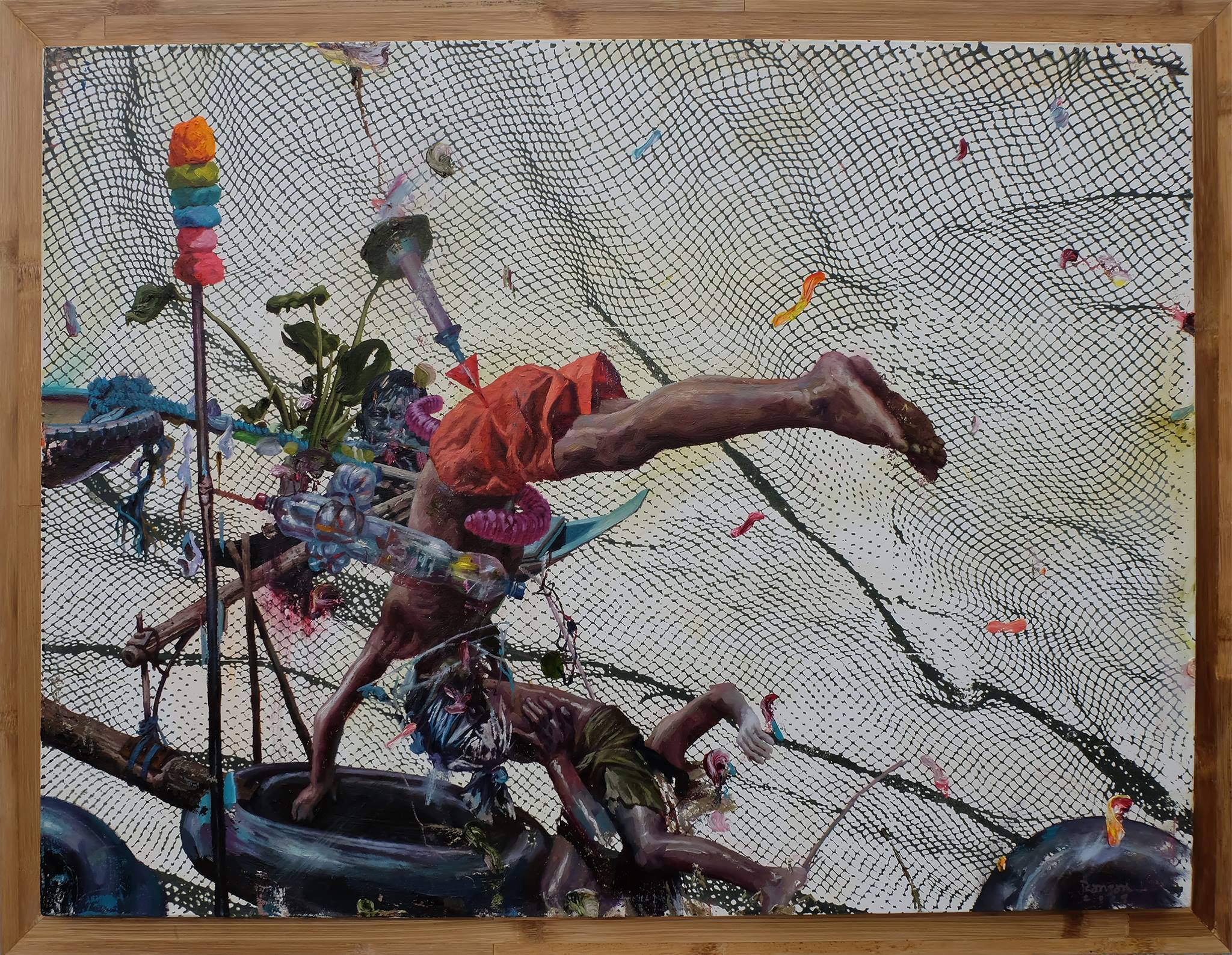 Filipino artist Ronson Culibrina has been known for his playful interpretations of history, the Filipino diaspora, or art historical figures that he remixes into contemporary or pop imagery. However, recently Culibrina has looked back to his formative years in the island of Talim, Rizal to create figurative paintings of those surroundings painted in a palette inspired directly by the iridescent oil spills caused by industry.

When looking at his paintings, mentioning the clash of industrialization and globalization with that island community is unavoidable. Their impact, as well as that of consumerism is clearly depicted in the assortment of waste that blends well with the debris of invasive painterly markings, splatters, and abstract formations. Is the fetishization of poverty and its struggles happening here too? It’s something we’ve come to expect with a lot of Philippine painting that wants to assert its value by being grounded in a kind of compassion or sense of beauty and identity found in the simple, humble, and idyllic. Culibrina’s paintings, however, don’t seem to be doing that.

The fractured reality that we see in his canvases, the one we see drowned in discoloration and vigorous paint is rooted in witnessing a lakeside community and environment subject to the rapid unnatural changes of modern life. And just as that paradise transformed, he subjects its images and his memories of it to his own process of modernization, a process that involves research into the many ways contemporary art filters visions of the world.

Consider that Culibrina’s pictorial spaces seem to have an affinity with programs that create and edit the streams of images that we encounter everyday. Portions are selected, cut, tweaked, obscured, erased, and painted over while a pictorial device as old as the Renaissance is preserved. Single point perspective, the illusionary depth from which Western art is founded, becomes the firm ground that supports all of Culibrina’s alterations. The same could perhaps be said about the fisherman’s net that fills the spaces between imagery. These nets seem to catch whatever Culibrina throws into these new spaces and become subject to Culibrina’s prism.

Ronson Culibrina is a Filipino contemporary artist, who though relatively young in his career has garnered acclaim and has exhibited his work in and out of the country. In 2018, he was a recipient of the Fernando Zobel Prize for the Visual Arts in the Ateneo Art Awards, for which he was in turn granted a residency at the Liverpool Hope University Creative Campus in the United Kingdom. Before that, Forbes recognized Culibrina as one of its nominees for its 30 Under 30 in 2016. In 2019, he was recognized as one of the Top 10 Young and Inspiring Filipino Entrepreneurs. Culibrina has had solo shows in prestigious galleries, such as Blanc and 1335 Mabini in Metro Manila, Yavuz Gallery in Singapore, and Galerie Michael Jannsen in Germany and Singapore. He has participated in group shows at the Bencab Museum, Vargas Museum, Art Kaohsiung, among others.