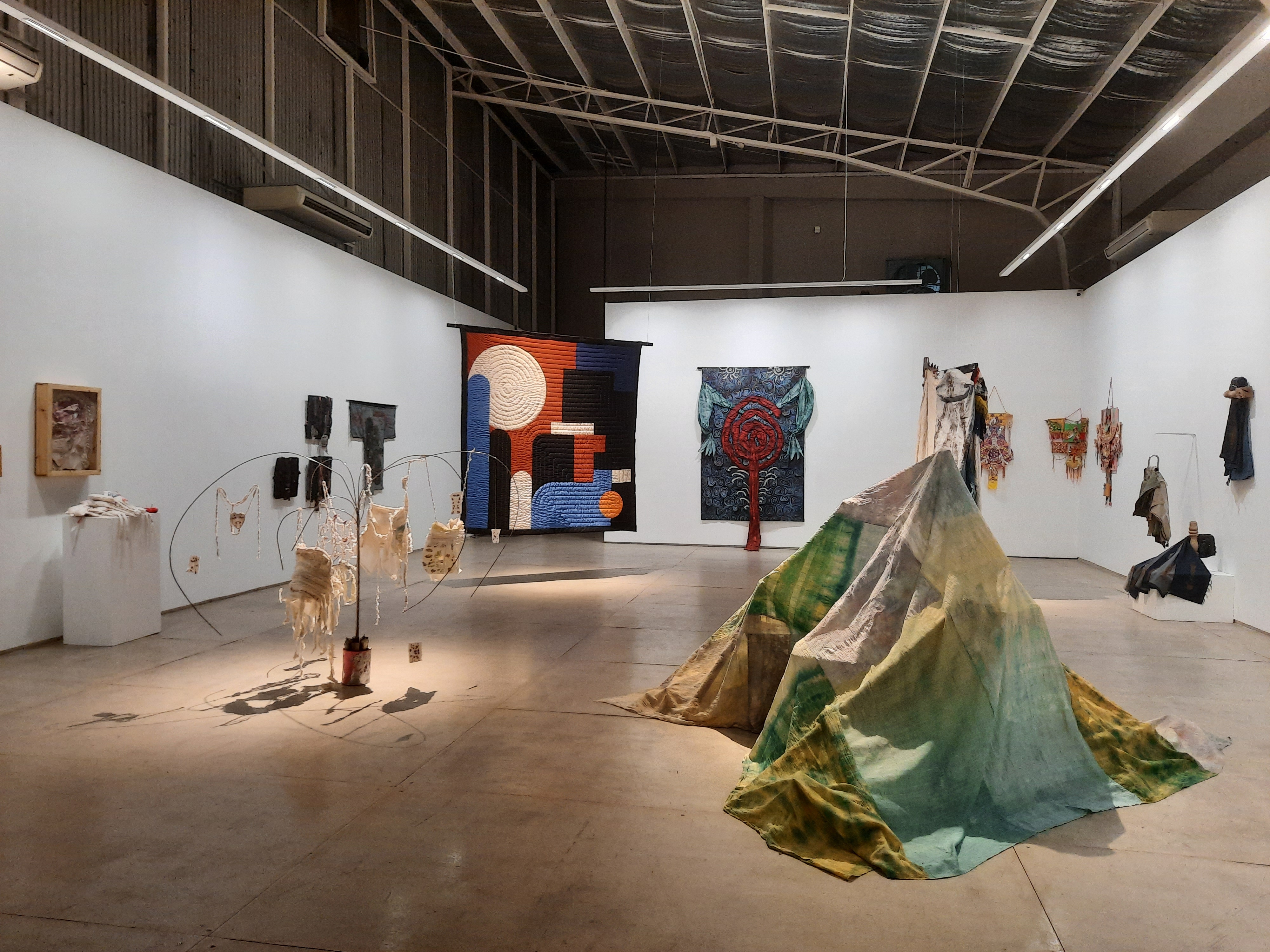 A Review: Con Cabrera's "A hem of a long conversation"

As with most art galleries that run quality shows, artworks are treated as commodities worth incredible sums of money and often at steep prices. From the moment one walks in, an aura of "look but do not touch" surfaces. That being said, The Drawing Room gallery made a very good choice putting up a show that felt more like the high point in a folk handicraft museum rather than the usual commercial art gallery group exhibit. In the group exhibition "The hem of a long conversation" curated by Con Cabrera, the attribute of making works speak for themselves is instant. For handicraft has no ambition other than to be seen for what they are. There is no pressure to create something so high-sounding. I am reminded of the common everyday things we encounter each day, far from a gallery setting. When is the realm of folk craftsmanship abandoned to become a work of art?

When one is too familiar with something, one loses the ability to truly see it. Enter the world of utility: bedsheets, utensils, runo blinds and so on (in this pandemic, face masks have now entered this category). But being durable, common and useful can hold the same grace as being fragile, scarce and purely aesthetic. JAF handicraft and piña industry, based in Kalibo, Aklan illustrates this notion. They are a group that produces locally-sewn everyday clothing for small and medium-sized businesses, as well as supporting the Aklan weaving community (also assisted by DSWD and DTI). Consequently, Zeus Bascon's floor-bound "Mountain" was a collaborative work with JAF. For me, this work with its greenish, mustard, mauve and light earth tones was one of the highlights of the exhibit. Borrowed wood sticks and boxes from the gallery's frame shop act as armature to make it "rise". "Mountain" is the fruit of Zeus' four-month stay in Aklan wherein the dyeing, cutting, and stitching of the work was a collaborative effort between the artist and the local craft community.

I don’t think any of the works in the show were signed and likewise Con did away with any exhibit captions. For me this only enhanced the atmosphere further, into something miscellaneous but single-minded and with an unconscious devotion to the material processes that gave birth to these works. Similar to "Mountain", Diokno Pasilan did a residency in a Palawan piña weaving community for his 2002 work "Sino si Gloria?". Made of natural dye, rust, bees-wax on piña fabric, my first impression was whether this work contained some sort of calligraphy or ancient text? But then I realized there’s really no need to theorize on art here. Instead, it’s a good reminder that a local environment and its raw materials are inseparable. When a local environment is rich in certain raw materials, a certain craft is developed that is beautifully natural and free-flowing. In contrast, when a local or natural environment's conditions are not taken care of, the craft is dull and undeveloped. Therefore a rich quality of craft is a gift of nature.

However, this is not to say no personal touch was present in the works. Some other works have a hint of narrative such as Denver Garza's "Devourer". For this artwork, Denver said "I was looking at pictures of a dragon head (although it looked more like a phoenix). I think the general concept is making a creature that could act as a protector, a symbol of hope and light from difficulties. Red for passion and green for self-preservation. There are various elements such as wings that symbolize flight and freedom, and eyes to see beyond what is in front of us. "Devourer" is also completely handmade-- sourced from local shops and completed by Denver at his studio.

My visit to this exhibit was an impromptu one, and while I admittedly did not get to spend time with the works as much as I should have, and have never really been a huge fan of textiles and handicrafts, Con's exhibit made me rethink all of this. "The hem of a long conversation" is fresh and truly the start of a new conversation. In all the works, there is a self-controlled surface elegance that can only be achieved with the hand. The human hand as the lifeblood of handicraft. The human hand as an amazing gift to mankind. Truly as Immanuel Kant quotes- "The hand is the visible part of the brain".

This article was written by Joshua Alexander Manalo, a contributing writer. The content does not reflect the views, opinions, and positions of Vintana.ph.