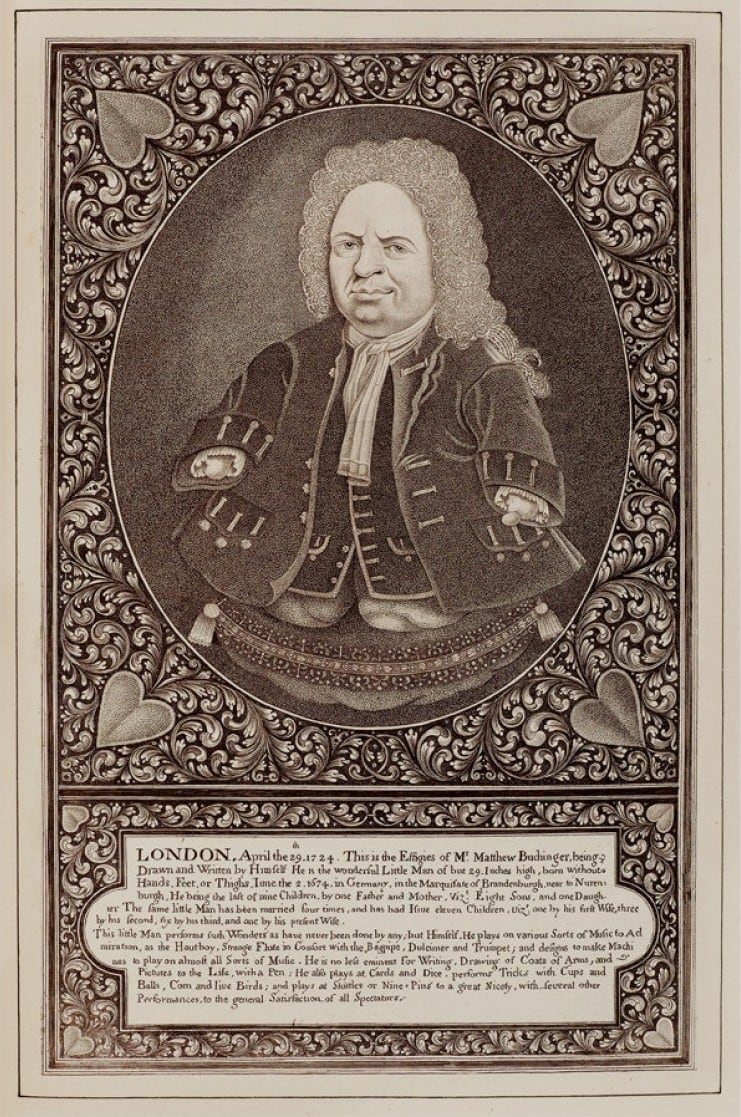 Notice anything unusual about the first picture of this post? The second and third pictures reveal that the curls of the man’s hair are made of tiny biblical text -- letters of seven psalms and the Lord’s prayer. This is an engraving and a self-portrait by Matthias Buchinger. It’s an example of micrography, drawings made with tiny calligraphy, often needing the aid of magnification to be genuinely appreciated. Buchinger, who lived from 1674 -1739, was famed for his skill in the art.

His micrography consisted of making decalogues or designs incorporating the Ten Commandments, family trees, coats of arms, and portraits of royalty. Most of them bear his signature written in forward, backward, and upside-down calligraphy. He accompanied this with the epithet “born Without Hands or Feet in Germany June the 3 1674.”

That’s right. Buchinger had no arms and legs and stood about twenty-nine inches tall. Despite that, he called himself “the Greatest German living” and was known throughout Europe as “the man from Nuremberg.”

Buchinger was not only an artist but also a polymath who possessed unusual dexterity. He was a sharpshooter, magician, musician, and a builder of miniatures inside bottles. He entertained with these talents in fairs, inns, and courts in Germany, France, England, and Ireland. He had four wives and sired 14 children by eight women.

Without the help of a magnifying glass, it would be extremely difficult for you to make out the letters in the curls of Buchinger’s self-portrait. So how can anyone working with a quill and ink in the 18th-century draw and write so tiny yet so artfully, much less someone who didn’t have hands?