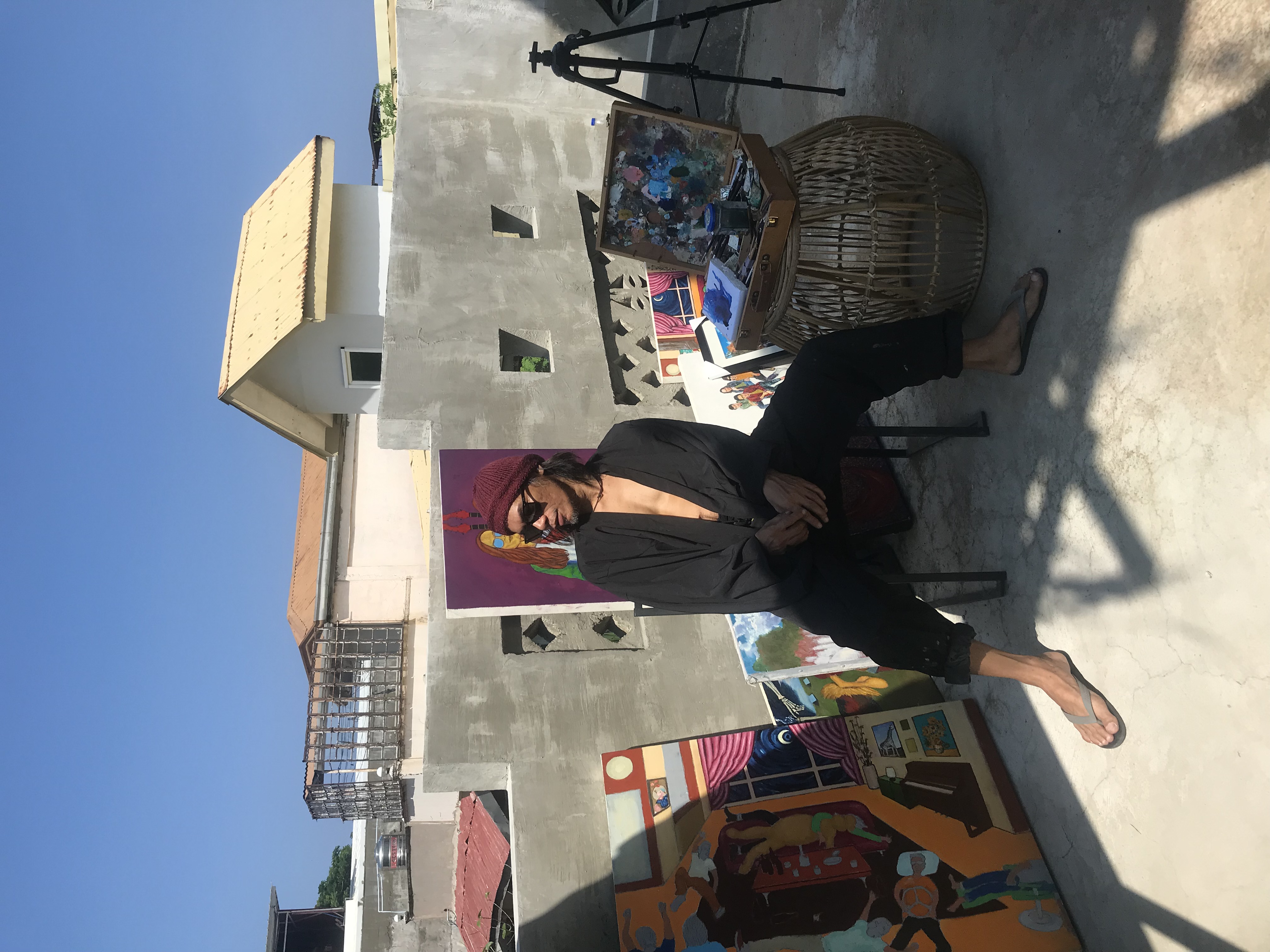 Only a careful slog up and down the hills of his mind would reveal the veracity of this culture trickster’s art. Strewn with musical instruments, film equipment, books, studies, art knick knacks and paintings, with his three beloved cats, Marcus Adoro’s abattoir boasts of attitude, a punkish disregard for the past allied to a noisy creative energy that has settled into a habit. His artistic incarnation has become tangible in a blizzard of bits only to be released carefully—with an improvisational style learnt from the rock and roll greats he admires.

Adoro, who is known as the lead guitarist of legendary Filipino band Eraserheads, has been creating visual art outside his musical life for quite some time. Utilizing the constantly flowing connection between music and art, his body of work demonstrates their mutual dependence on harmony, rhythm, balance, and repetition. Whether he’s cooking, recording a song, or painting a portrait, his process still lies upon cohesion. And as one might expect, much of Adoro’s work is imbued with kitchen-sink realism and neo-expressionism often complemented with humor, quiet meditations, and portrayals of veiled heartaches. His painstaking attention to detail illuminates muted stories about his time as an iconic guitarist who left town to become a surfer and as someone who eventually picked up a brush to conquer bigger, more plangent cliffs.

Much of Adoro’s paintings depict various subjects in static poses, some in profile, while his scenes are largely studies in perspective. A self-taught artist, he cautiously applies his own technique, incorporating light, color, and shadow to create dimension as he draws upon weighty influences of masters such as Van Gogh and Caravaggio which then positions his focus on the paradox of accuracy and vagueness in both theme and craftsmanship. Over time, this process has become critical to his artistic development. Additionally, Adoro’s creative process is similar to that of his music-making approach where you can imagine Donald Duck’s bottom being lit with fire—an obvious kinship with the songs he writes as he knuckles down on the existential and the subconscious that forms the foundation of what some might be willing to call his oeuvre. The secret nature of Adoro’s work lies in the isolation of its creation where he finds opportunity for freshness. This is where he discovers a test of character, direction, and substance which ultimately, perhaps inadvertently, lends an emotional heft to his visual quips.

Marcus Adoro is a Filipino contemporary artist, musician, songwriter, filmmaker, writer, surfer, and cat mom. He is primarily known as the lead guitarist of acclaimed alternative rock band Eraserheads. He continues to work on multiple creative projects such as painting, filmmaking, musical scoring, screenwriting, carpentry, and surfing. He recently launched an Eraserheads-inspired NFT collection. Adoro typically works with oil on canvas but has tried different mediums such as acrylic, watercolor, pen and ink, and wood.