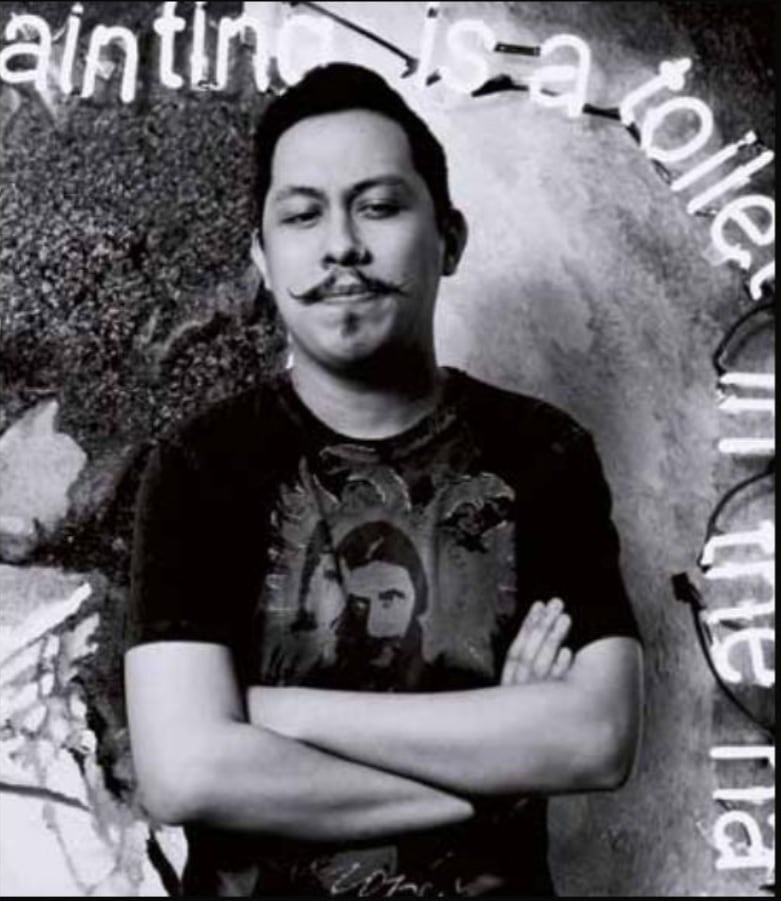 In 2019, artist Lyle Buencamino was at a crossroads. Many have faced a similar choice: leave everything behind or reassess ideas and artifacts of one's practice. Both aim towards progress or even rebirth. Artist John Baldessari burned all his early work in what he called his "Cremation project." Meanwhile, Buencamino, in his solo show “Artist Expires at age 40 Exhuming Primary Artistic Assumptions,” presents a funeral of a depleted artist, complete with a pyre of old paintings and bones in the primary colors. The word “exhume” suggests an undying commitment to rebuilding from old parts. The large painting of a funeral, a film still, is one of those old ideas resurfacing.

Buencamino has been known to base paintings on stills of movies by LVN Productions in the 1950s, comedic and raucous scenes turned into tongue-in-cheek references to art. They offer nostalgia for a more sensible and glamorous time. But Buencamino really focuses on these stills as playful devices for other layers of meaning besides pining for a golden age. There is his series of "You are your worst critic" paintings of bowtied comedic sidekicks which appear like these stills. They taunt and suggest the conflict experienced in one’s creative process. They also awkwardly acknowledge the place of criticism in artmaking, with the characters looking like goofy art critics and intellectuals. These supporting characters bungle up the sincere efforts of the leading man or lady, but make the plotline more interesting and fun.

Lyle Buencamino is a Filipino contemporary artist who has had solo shows and group shows in the top galleries in the Philippines and Singapore. His latest solo show was at Chan Hori Contemporary in Singapore. In 2006, he was a recipient of the prestigious Ateneo Art Award and embarked on a one-month residency at La Trobe University in Australia.