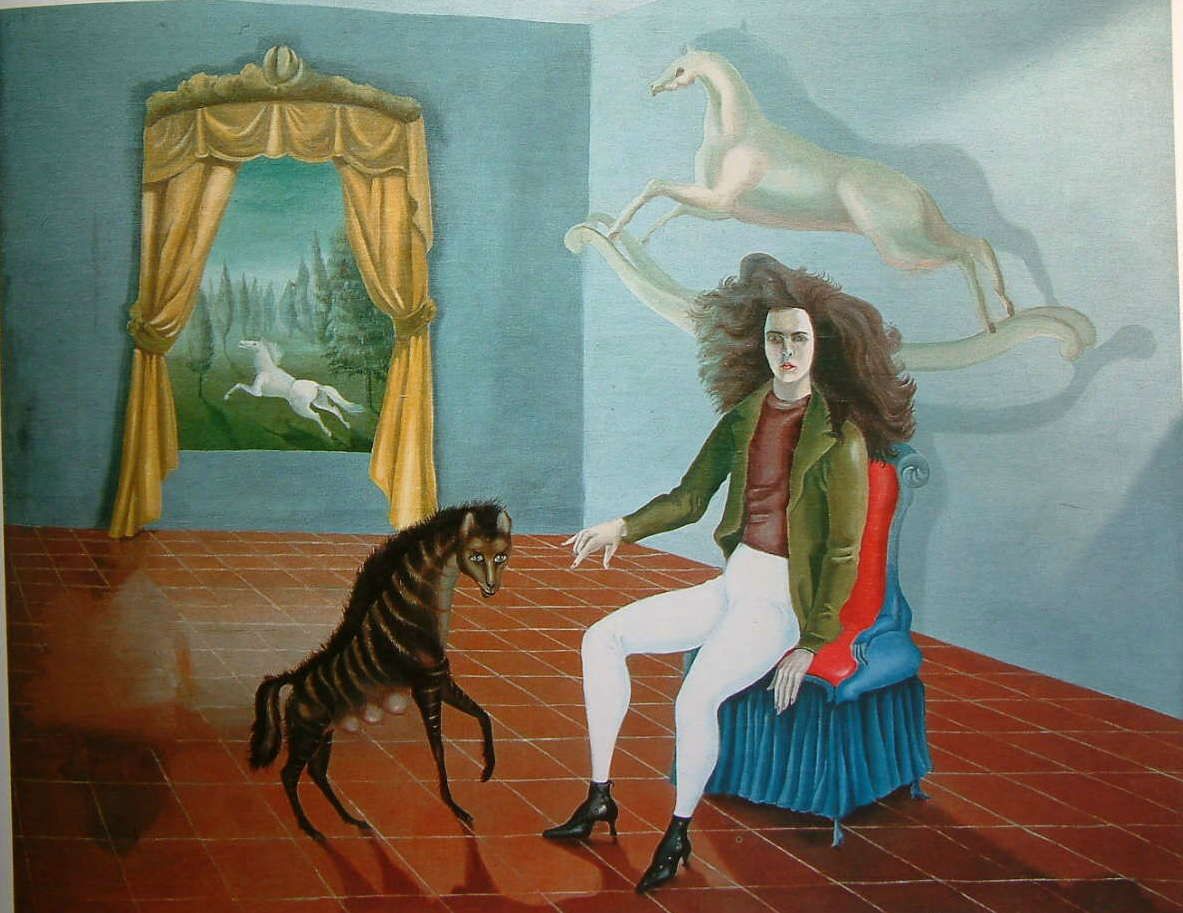 A debutante sends a hyena in her place to a high-society ball in order for her to run away. The stinking animal wears high-heeled shoes, gloves to hide its hairy hands while the ripped off face of her maid is nibbled neatly all around. This pretty much sums up the life of surrealist painter and novelist Leonora Carrington. While it does read like a fantastical fiction, they’re all true.

Leonora Carrington rejected an upper class, debutante life in favor of making art in Mexico where she made real life as surreal as art. Carrington shares the surrealists’ keen interest in the unconscious mind and dream imagery but added her own unique blend of influences such as Celtic literature, Renaissance paintings, Central American folk art, medieval alchemy, and Jungian psychology. You won’t need to take a closer look at her work to behold its beauty. There is an immediate indelicate sense of eccentricity in her fascination with animals and with bodies both otherworldly and profane. Her imagery displays her high-spirited, baroque sense of humor which often seems to wed the artificial to the natural that every time her work is reborn, it seems more prophetic as her comedy and tragedy becomes finely-tuned to our growing consciousness of the nonhuman world and the forces that inhabit it.

Carrington’s art is dense with hybrid figures and fantastic beasts that range from humorous to horrendous. Whether there’s women undressed down to their skeletons or a sociable hyena about to venture into a debutante ball, her stories are always full of strange and spectral charm. She painted using small brush stroke techniques building up layers in a meticulous fashion. Throughout her life as an artist and writer, she explored themes of transformation and ideas of female sexual identity. She drew on her own life and friendships to represent women’s self-perceptions, as well as the bonds between women within the male-dominated environment.

Her work in the 1940s focused on the underlying theme of women’s role in the creative process using magic realism, alchemy, and symbolism as the subjects of her paintings. It was during this time women artists correlated the female figure with creative nature using ironic stances. The narrative behind her images are themselves a subversive retort to the male surrealists’ view of women which sits nicely alongside their sheer dreamlike weirdness.

Leonora Carrington was a British-born Mexican artist, surrealist painter, and novelist. She established herself as both a key figure in the Surrealist movement and as an artist of remarkable individuality. She had a brief and turbulent affair with the older surrealist artist Max Ernst with whom she shared concerns about the dream world and the symbolic intermediaries connecting to reality. She lived most of her adult life in Mexico City and was one of the last surviving participants in the Surrealist movement of the 1930s. Carrington was also a founding member of the women’s liberation movement in Mexico during the 1970s. She died in 2011 at the age of 94 in Mexico City. Her works are included in the collections of The Museum of Modern Art in New York, the Peggy Guggenheim Collection in Venice, and the Tate Gallery in London, among others.