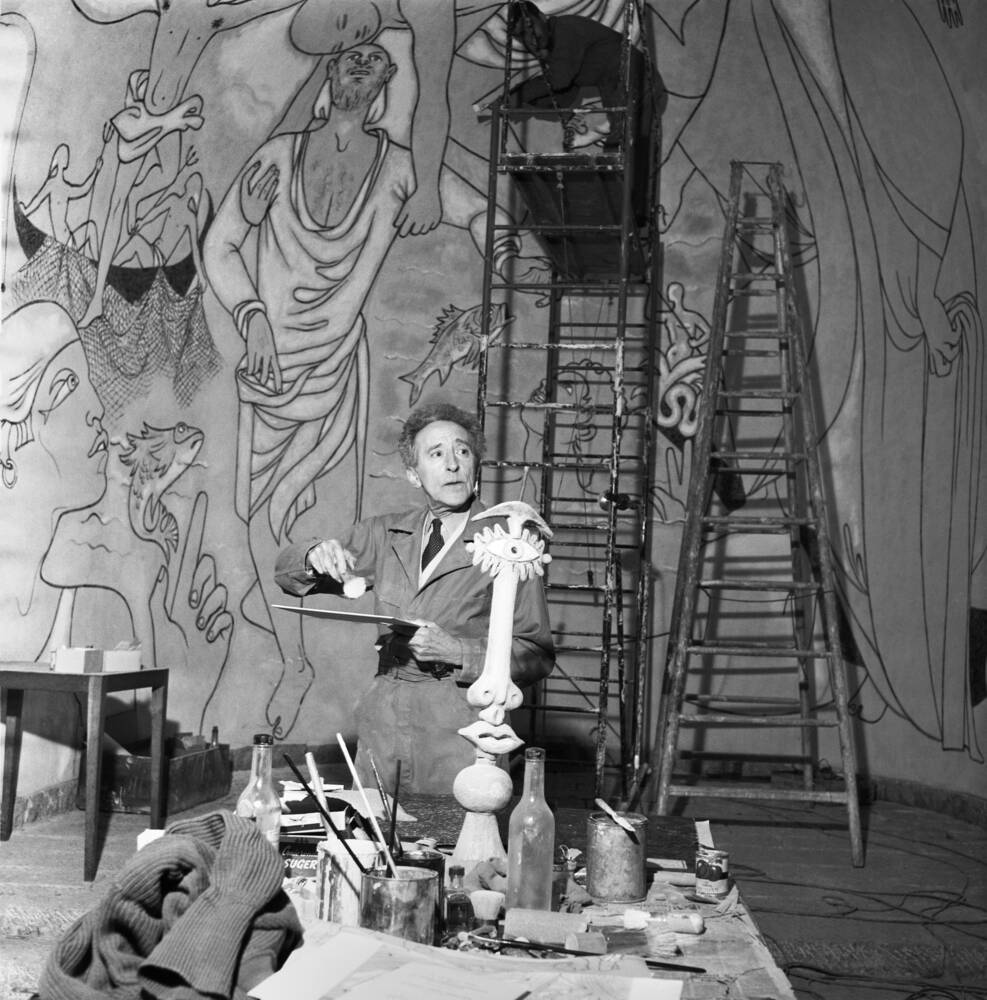 Cocteau pursued a fantastical sense of resemblance in his early drawings having observed Sem (Georges Gourçat) and Leonetto Cappiello’s caricatures. Inspired by their influence, Cocteau cultivated the synthetic intensity of line to create a primarily graphic and secondly plastic artwork ultimately representing the human figure. He touched on avant-gardes, Cubism, and metaphysics at the same time not really adhering to those practices. In 1926, Cocteau’s play “Orphee” was staged in Paris and was quickly followed by an exhibition of drawings and “constructions” called “Poésie plastique–objets, dessins”.

He moved to Paris in 1907 and began to focus his attention on a dream-like life and rejected all forms of sadness. Throwing himself into the Parisian bohemia, he met several distinguished artistic and cultural members of the community including Pablo Picasso, Amadeo Modigliani, Marcel Proust, André Gide, and Leon Bakst. He collaborated with some of these artists and writers and produced the libretto on “Le Dieu bleu” for the Ballets Russes and in the following years, the ballet “Parade” which later became a full opera. He also became close friends with singer Edith Piaf, who starred in his play “Le Bel Indifferent”.

Cocteau began to associate with the Cubism movement calling it a “recall to order” after World War 1 where he served as an ambulance driver in the Red Cross. In this period, he continued his friendship with Picasso but distanced himself from some of his former contacts. While he was often associated with Surrealism and Dadaism, Cocteau was bullied by groups of Parisian artists due to some personal relationships and because of his fantastical and idealistic perception which supposedly opposed the Surrealist school of thought.

Cocteau was mostly associated with his films in his later years, becoming a notable influence on filmmakers like David Lynch. Throughout his filmmaking career, he created around 12 films each utilizing surrealistic and symbolic imagery. Cocteau was plagued with opium addiction in his early and later years, and his health had already been in decline prior to his heart attack which caused his death in October 1963 at the age of 74. He continues to be an important exponent of avant-garde art and film.