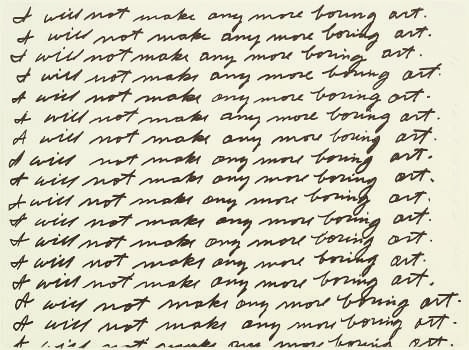 I Will Not Make Any More Boring Art

In July of 1970, disillusioned with the state of painting in the 1960s, John Baldessari burned many of his early landscapes and abstractions. By then he had abandoned the painterly conventions he found alienating and was making canvases using photographs and texts. Works like I Will Not Make Any More Boring Art, his first print, demonstrate his thinking at the time and his developing interest in Conceptual art. Created at Nova Scotia College of Art and Design in conjunction with an unconventional exhibition, it depicts a sentence that Baldessari instructed students to write on the gallery walls "like punishment." He was not present at the "exhibition," nor at the workshop where the print was made. He simply sent a handwritten page to be reproduced and made a videotape of himself writing the sentence.

Such activities were typical of this school's experimental program in the 1970s. Its lithography workshop, in particular, served to broaden the scope of printmaking by inviting artists like Baldessari, Vito Acconci, Dennis Oppenheim, and others to explore its potential for Conceptual art projects.

Baldessari has gone on to make about ninety prints, primarily in his signature photo-collage style. An example of his collages, made from stills of old B-movies superimposed with geometric shapes, is seen here in an illustration for a special edition of Tristram Shandy. This spread is part of an accordion-folded volume of his illustrations commissioned by Andrew Hoyem of The Arion Press. When Hoyem learned of Baldessari's interest in Laurence Sterne's novel of 1760, he invited him to participate in a new publication that matches Sterne's disregard for plot and punctuation with the artist's own disjointed imagery. The project also includes a volume of the complete text with all its eccentricities intact, and another containing a critical essay.