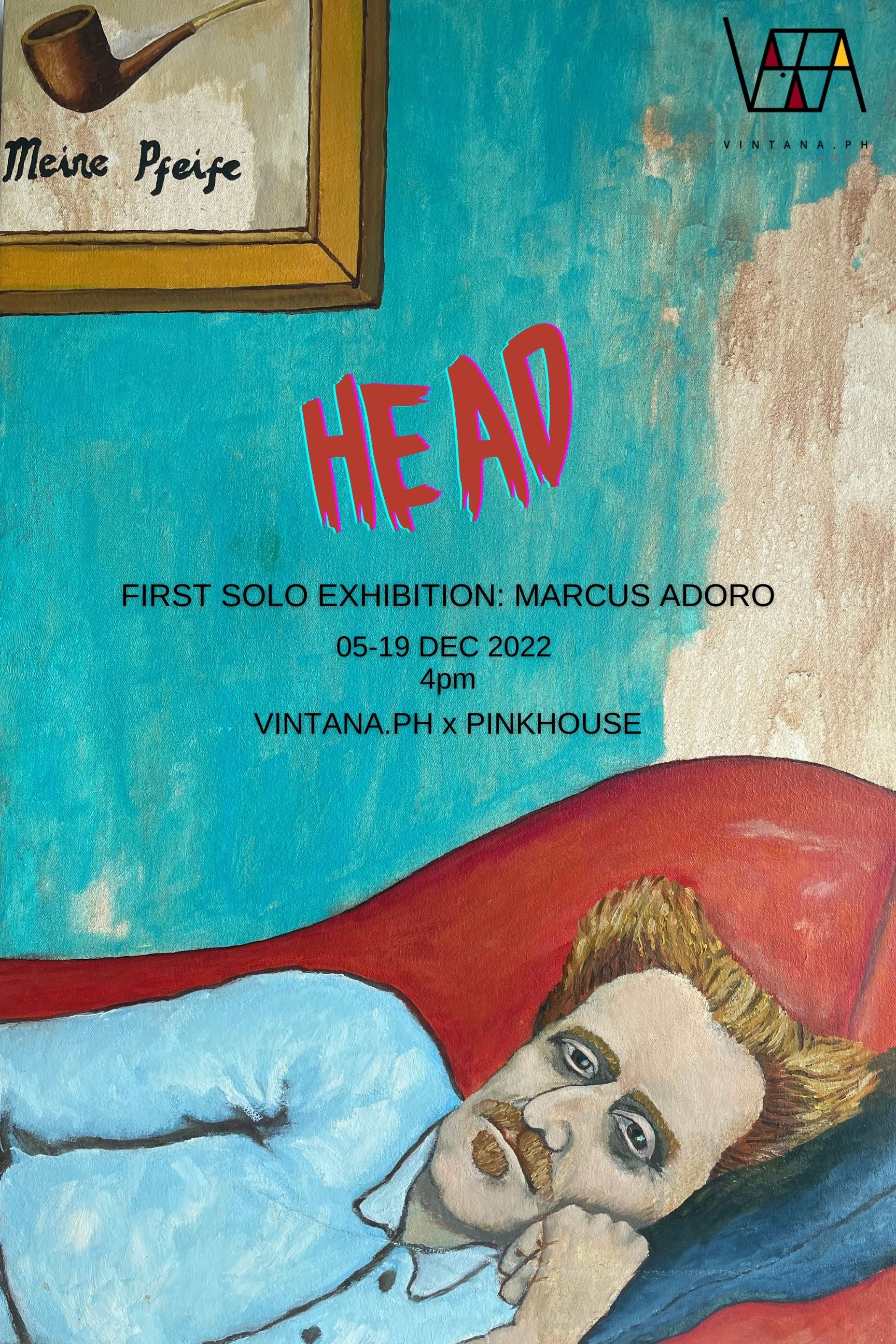 Suggestive of his state of mind, multifaceted artist Marcus Adoro transcribes scenes from memories, dreams and nightmares, objects of his affection, and thoughts born out of pandemic-idleness into fractions of his visual autobiography. A restless innovator, Adoro has progressed toward simplified forms and blocks of intense color with the avowed purpose of conveying strong emotion, spanning an intensive range of artmaking including painting, wood-cut works, and drawing. While Adoro is better known as the guitarist of an esteemed Filipino band, he has produced a stunning number of paintings—most of which he created during the lockdown and had originally intended to spirit them all away somewhere in Europe before he passes on. This is the beginning of his story as a painter according to the artist himself.

In his upcoming first solo exhibition “HEAD”, Adoro's body of work can be seen as self-portraiture. With dynamic images cropped from a larger narrative and containing hermetic universes unto themselves, his love for technique is perpetually evident in his work. In one of his works titled “Dr. Gachet Awaits…Vincent Van Gogh’s Prescription”, he explains that he played with historical sequence and perspectives, putting an altogether alternate context to how Van Gogh depicted Gachet in his paintings. But one thing remains clear, there is quiet melancholy, and perhaps it could fester in even the most stable heads and hearts of saints and villains. That at least once in our lives, we simply have to dance with our own demons, which Adoro hastily dismisses as “the mental health dilemma”, a younger generation’s excuse for the traps in which we enclose ourselves. But at the same time, he’s had front row seats to his own self-destruction.

There’s a cherry on top: Adoro imbues his work with a unique language of storytelling and humor, drawing viewers into the kind of sub-surface worlds he has been fascinated with all his life. Somewhere in between, where things aren’t seen with the naked eye, there is always goodness in blue skies and flowers, but another force, a wild pain and decay also accompanies everything.

Marcus Adoro is a Filipino contemporary artist, musician, songwriter, filmmaker, writer, surfer, and cat mom. He is primarily known as the lead guitarist of acclaimed alternative rock band Eraserheads. He continues to work on multiple creative projects such as painting, filmmaking, musical scoring, screenwriting, carpentry, and surfing. He recently launched an Eraserheads-inspired NFT collection. Adoro typically works with oil on canvas but has tried different mediums such as acrylic, watercolor, pen and ink, and wood.