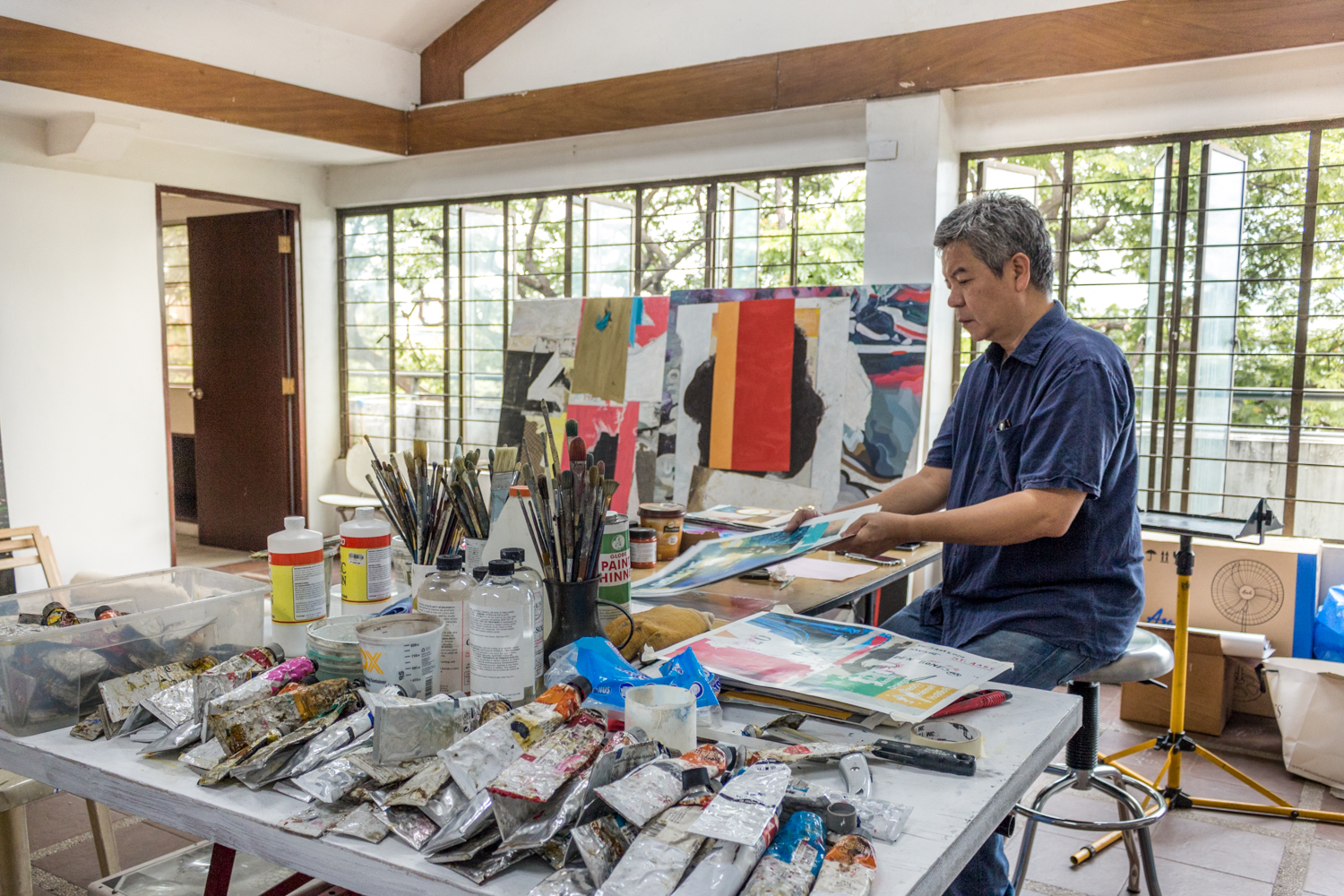 Gerardo Tan is a Filipino contemporary artist with an established career of over thirty years. Often described as a multimedia artist, his mutable artistic practice finds him engaging in diverse explorations, such as painting, video, found objects, artist’s books, installation, and sound art.

Known for various paintings, from spin and skateboard paintings to silk screens and photorealistic oils, Tan displays a sense of fun even as he delves into what constitutes painting, its web of concepts and traditions. Perhaps his collage-based paintings are his most well-known works. These glutted paintings that reproduce collected fragments of our visual culture display a key characteristic of his oeuvre and practice.

Appropriation from original sources features heavily in his works. According to art writer Lisa Ito, his collage-based work “replicate the gaze of today’s culture” and “probe and question” accepted concepts of originality and individual style in art. Tan’s reproduction of Hiroshi Sugimoto’s photos and his large scale silk screen paintings of white noise also reveal Tan’s fascination with exploiting this method. Tan uses painting, as artist-curator Arvin Flores puts it, as a “conceptual toolkit,” playing with conditions inherent in art such as authenticity, representation, abstraction, and the oft-mentioned simulacra, to the point that these concepts are revealed as unstable.

Gerardo Tan is set to participate in the 59th Venice Biennale in 2022. Representing the Philippines in probably the most prestigious art event in the world, he will be collaborating with musicologist Felicidad Prudente and weaver Sammy Buhle in "All of us present, This is our gathering/Andi taku e sana, Amung taku di sana," a project curated by Yael Buencamino and Arvin Flores. It is assumed that this cross pollination of weaving, sound, and visual objects for the biennale is continuation of Tan’s work from 2018 called the Hablon Redux Project, where ambient sounds and continuous beats of weaving served as material.

Gerardo Tan is a recipient of the Cultural Center of the Philippines’ 13 Artists Award in 1988, his work has been included in notable exhibitions such as the 2nd Asian Art show of the Fukuoka Art Museum (1982), the First Melbourne Biennial (1999), the 4th Gwangju Biennial (2002), and the inaugural exhibition of the National Gallery of Singapore (2016). A former Dean of the University of the East College of Fine Arts and an art educator, Tan finished his MFA degree in Painting at the State University of New York at Buffalo as a Fulbright Fellow.