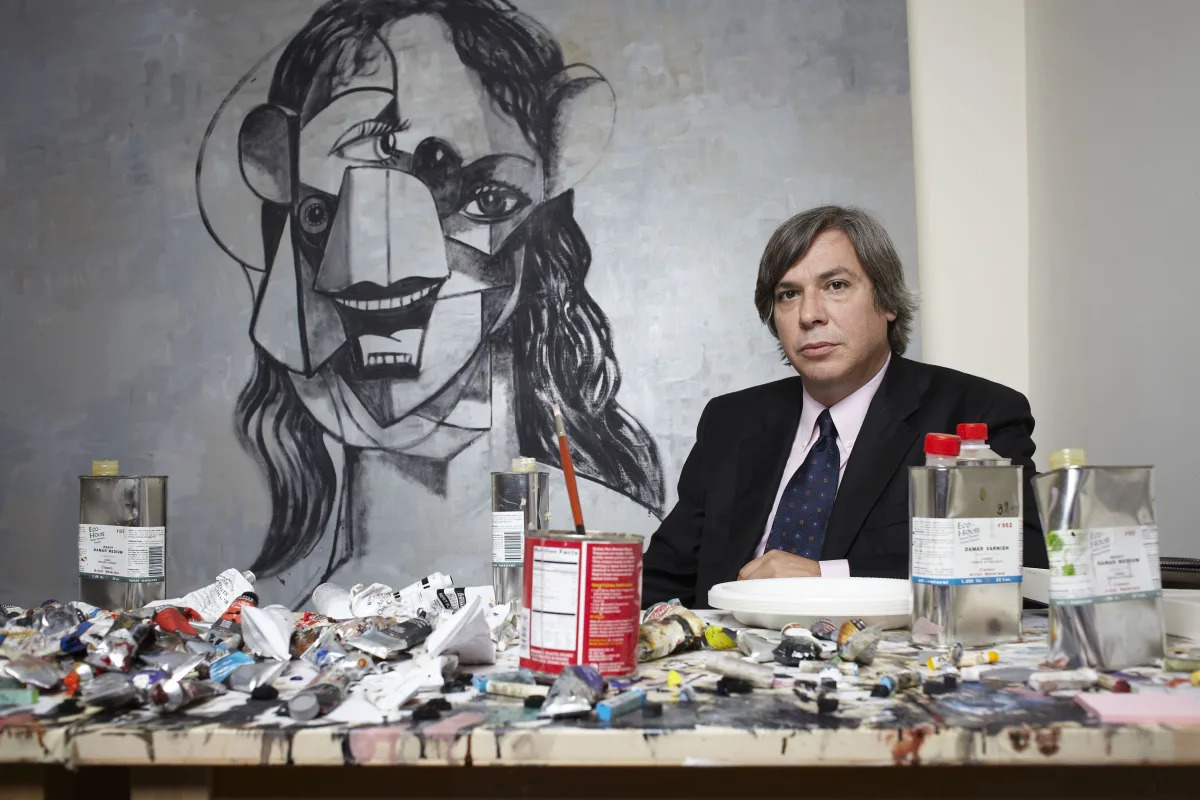 Known for his progressive, distinctively American figurative paintings style, George Condo has made his own reputation through his willingness to explore combinations of different artistic approaches within a single canvas. He calls his style “psychological cubism” which is an attempt to capture a subject’s multiplicity. Condo explains that “Picasso painted a violin from four different perspectives at one moment. I do the same with psychological states”. Because he was heavily influenced by the contrasting aesthetics of old master painting, cubism, and pop art, he often if not always draws from art historical references as diverse as Paul Cézanne, Jean-Baptiste-Siméon Chardin, Willem de Kooning, and Picasso.

Condo is acclaimed for mixing madness and beauty in his often figurative output, asserting that art’s potential is not to invent, but to reconfigure, retool, and innovate. This has been consistently depicted in his works as a parade of grotesque characters which are rendered with bulging eyes, bulbous cheeks, proliferating limbs, and fractured, distorted faces.

Condo studied Art History and Music Theory at the University of Massachusetts in Lowell. It was then that he became particularly inspired by a course in Baroque and Rococo painting. After two years he would move to Boston where he joined a punk band called “The Girls” and played the bass. He relocated to New York after meeting with Jean Michel Basquiat in a club. It was there where he pursued his career as an artist, working as a printer for Andy Warhol and where he became a founding member of the punk/blues band Hi Sheriffs of Blue in 1980. He also spent a year in Los Angeles studying Old Master glazing techniques. He also spent a decade in Europe where he invented his hallmark “artificial realism” and made his first foray into sculpture. Condo won his first major award “The Academy Award in Art” from the American Academy of Arts and Letters, in 1999, followed by “The Francis J. Greenberger Award” in 2005 in New York where he eventually settled.

Condo had his first solo show in 1983 at the Ulrike Kantor Gallery in Los Angeles. Since then, his work has appeared in a number of solo exhibitions. In 2017 a retrospective of Condo’s works on paper, ‘The Way I Think,’ traveled internationally from The Phillips Collection, Washington DC to the Louisiana Museum of Modern Art, Humlebæk, Denmark. In a large-scale exhibition one year prior, ‘Confrontation’ at the Staatliche Museen zu Berlin – Museum Berggruen in Berlin, Germany, work by Condo was presented alongside some of his major art historical reference points: masterpieces by Cézanne, Picasso, Matisse, Klee, and Giacometti. Condo’s portraiture was the subject of the 2011 – 2012 ‘Mental States,’ a mid-career survey exhibition which traveled from the New Museum, New York to the Museum Boijmans Van Beuningen, Rotterdam, Netherlands, Hayward Gallery, London, United Kingdom, and Schirn Kunsthalle, Frankfurt, Germany; and the 2005 ‘One Hundred Women. Retrospective’ shown at the Museum of Modern Art, Salzburg, Austria, and Kunsthalle Bielefeld, Bielefeld, Germany.

In addition to appearing in solo and group exhibitions, Condo’s work has been honored with inclusion in Biennials in the United States and abroad. In 2019 he participated in the 58th Venice Biennale’s ‘May You Live In Interesting Times.’ His work was also exhibited in the Venice Biennale six years prior, in 2013. Other biennials in which Condo has participated include the 13th Biennale de Lyon in 2015, the 10th Gwangju Biennale in 2014, the 2010 and 1987 iterations of the Whitney Biennial, and the 48th Corcoran Biennial in Washington DC in 2005.