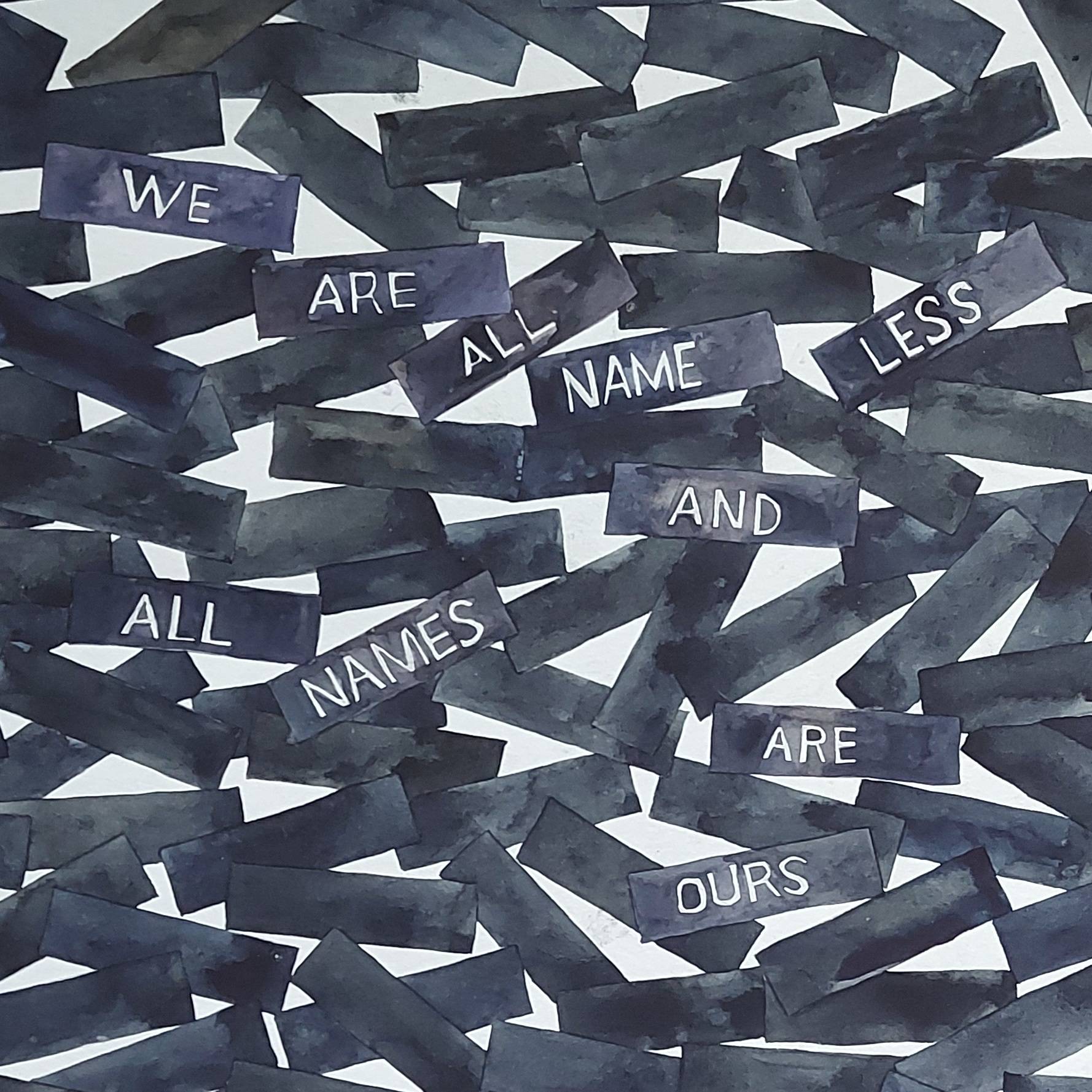 An Interview with Lena Cobangbang: A Date with Malevich 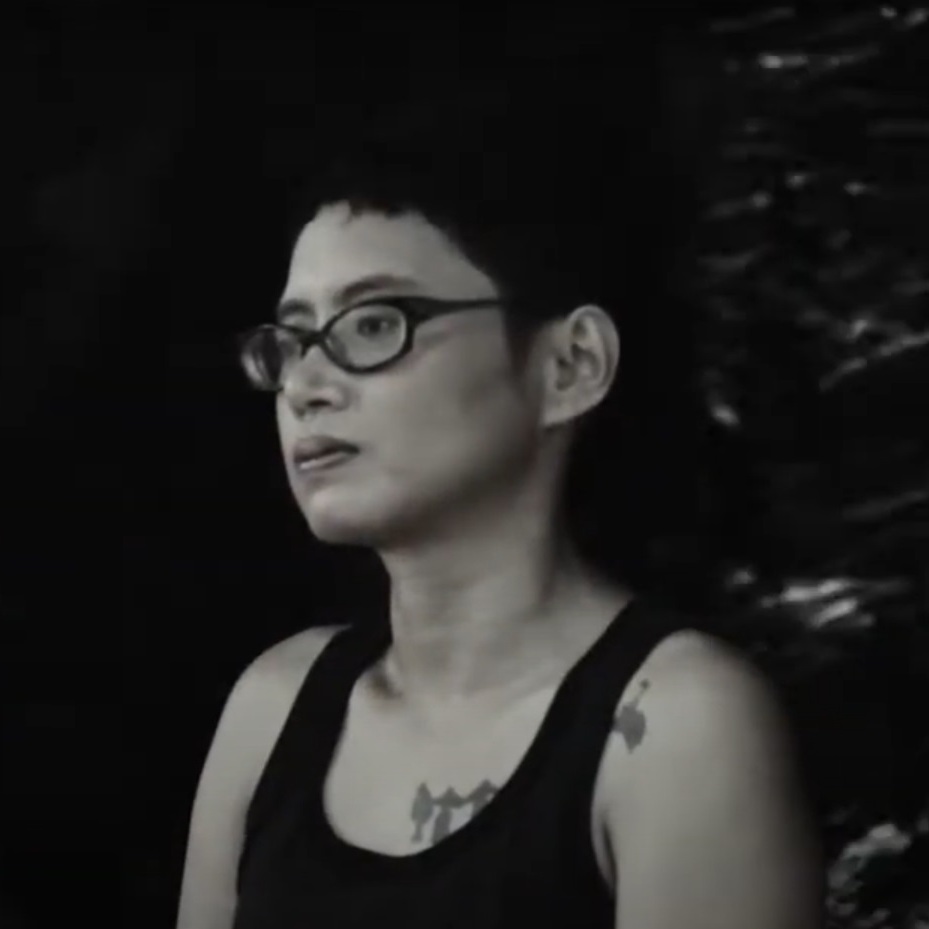 Since the early 2000s, video, installation, found objects, embroidery, cookery, performance, and photography have been used to describe Filipino contemporary artist Lena Cobangbang’s multifarious approach to artmaking. Over the past two decades, Lena has been known to engage in these various disciplines in collaboration with other artists.

Alice and Lucinda, a creative partnership with artist Yasmin Sison-Ching, and The Weather Bureau together with artist Mike Crisostomo are two long time projects that have resulted in paintings, films, zines, photographs, installations, to name a few. These collaborative projects have touched on many aspects of contemporary life and culture including celebrity, cosplay, science fiction, natural disasters, art history, the local art community and have even challenged ideas in the institutionalized displays of art and history. Not without a degree of cheeky fun, these projects always carried with it with a sense of irony, even sarcasm.

Lena is also a writer, curator, production designer, and art manager. She was a founding member of the seminal artist’s collective and independent art space, Surrounded by Water, in the later 90s and early 2000s. She was shortlisted for the Ateneo Art Awards in 2005 and received the Cultural Center of the Philippines (CCP) Thirteen Artists Award in 2006. In 2008, She was granted a fellowship at the HAO Summit for emerging artists and curators and completed her artist/curator research residency exchange between Green Papaya Art Projects and Pekarna Magdalenske Mreze in 2010. In 2008, she was a participating artist in the Singapore Biennale.

Lena was the curator and writer of the 2012 CCP Thirteen Artists Award and represented Post Gallery in Art Dubai in 2016. Lena has also been a recurring member of Bastards of Misrepresentation, a long-running touring exhibition and project curated by Manuel Ocampo.

We asked Lena about an aspect of her artistic practice that has recently been exhibited widely, her watercolors. Lena spoke to us about the medium itself, the patterns and iconography in these watercolors, their use of text, and their overall significance to her practice. She also shares insights into what has become a constant in her iconography, the brick wall.

Vintana: You’ve been known for varied non-traditional media including installation, film, photography, and zines. By some assessments, this work has focused a great deal on collaboration, such as your work as one half of Alice and Lucinda and the Weather Bureau, and on the contemporary art community as the subject and material of your personal projects.

In the past few years, you’ve been exhibiting watercolor on paper quite often. Most of them take the appearance of flora, maps, brick-like patterns, and camouflage. Painting is a surprise, given it’s a contrast to common assessments of your work. For one, It’s a traditional medium and another, it’s a private and more introspective process.

Is this what attracts you to the medium? Or are there other reasons? How do you think this seemingly outlying aspect of your practice relates or connects to the other things that you do as an artist? 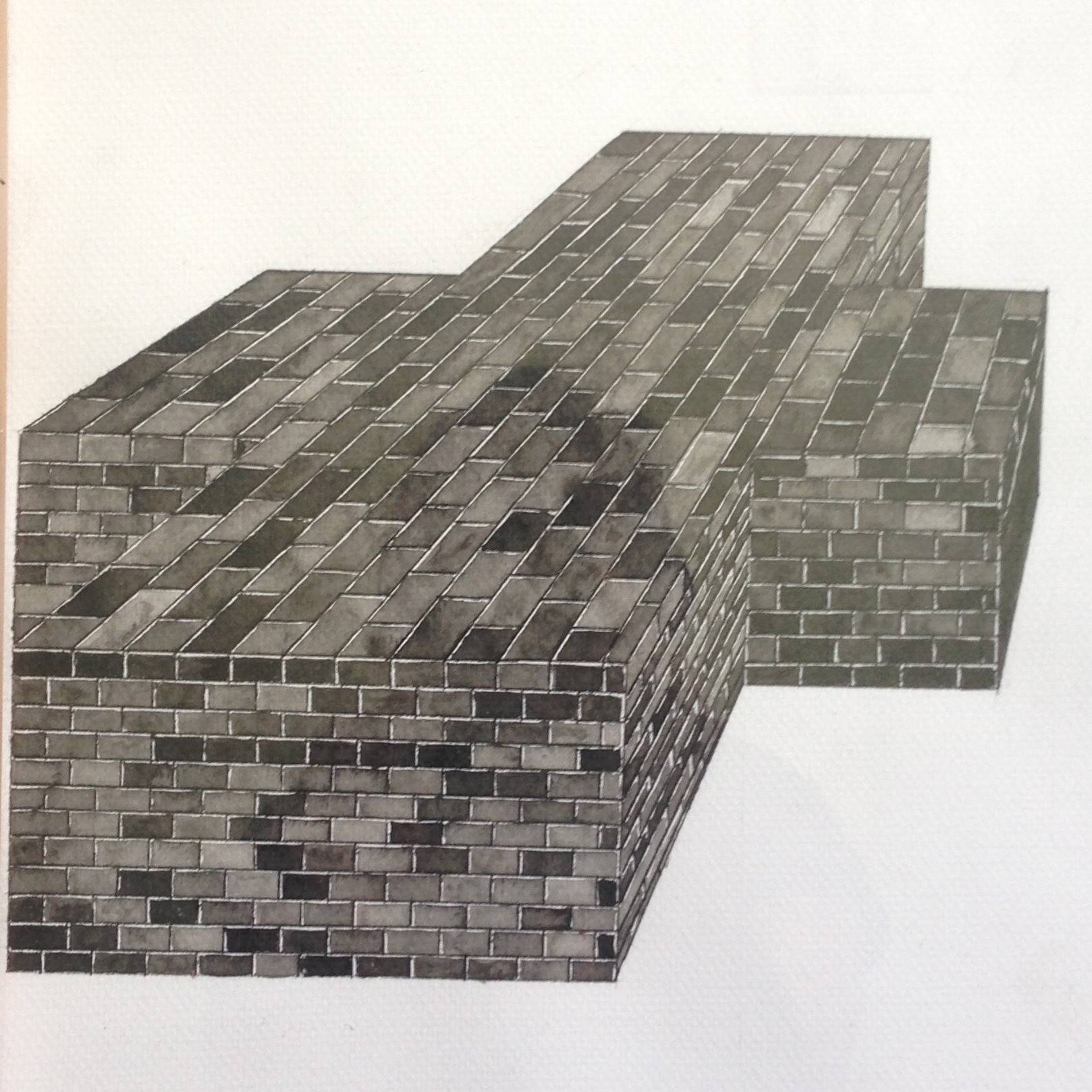 Lena Cobangbang: Why did I choose to paint in watercolor? Primarily for practical reasons, working with a water-based medium doesn’t require much space and preparation. Secondly, I find watercolor still a very challenging medium that has yet to be explored for its possibilities. Thirdly, compared to traditional oil, and even acrylic, it doesn’t get much respect, being usually relegated as a medium for study, for the preparatory sketch.

By this, I guess all I’m doing probably are studies, my practice as a ceaseless study, not necessarily though, a sketch for a bigger work. The bigger work will be life itself, or the accumulated years of work and reading and research exploring all the philosophical conundrums of existence. Also, I feel that watercolor/water-based media is the closest to note-taking or something that’s published.

V: I see that a number of your watercolors serve as containers for text, whether hidden, obscured, or outrightly displayed. Can you tell us about how these messages are selected and materialize into a painting? ‘Tender Buttons’, ‘Elephant’, ‘We are all nameless and All Names are Ours’, ‘This Way or No Way’ are some messages found in your watercolors.

LC: I think I work in cycles, I continually reference my previous works, as well as other works. I also like listing down quotes I chance upon, whether from books or from graffiti or street signages. I try to deduce a pattern or code from these texts that I encounter, wondering if they’re all connected or if they form a bigger puzzle, or a larger narrative.

Yet, they all can just be patterns or forms in themselves - texts - that can be retrofitted in another form to produce another code or text. That’s because forms can also be read, and can be visual shorthand in themselves, i.e. visual tropes.

A brick is a visual trope, so is a black square, an animal figure a metaphor, all of them can be metaphors or even semaphores that reference other forms and text. I like this chain weaving and layering of form and text, it spawns a constellation of meaning, like opening tabs from a web site and clicking related links until you find yourself in a rabbit hole of more search terms.

LC: The black square of Kazimir Malevich is the epitome of the absolute - nothing and everything all at once, stasis and chaos, infinity and perfection, chasm and satiety. It is the zero point of painting.

Each brick or unit corresponds to the black square of Malevich and these units joined together as one whole also the same black square. In that way, the brick, the black square is also an echo and a reverb, a tautology of form as form, and as form within form. Then I connected this with Frank Stella’s Black Paintings, the tautology expanded into form’s objecthood. The Stella intercession for me, was rather a metaphor for The Marriage of Reason and Squalor. The form becomes language. The meanings or readings from it are as liquid and as porous as the material they are made from. It is the orthodox of material and form, yet labor can still belabor this.

Much like Argie Bandoy’s and Jayson Oliveria’s brick wall paintings where they have entreated them as pictures of a brick wall, the brick wall becomes a visual idiom, a pictorial shorthand for image as surface as object as a superficial piece of space.

The wall (as an absolute form) being a happenstance icon of modernism, stands as a potent signifier of monolithic power. It is beyond metaphor as it vividly conjures division and confinement, limited views and borders, no past, no future, no history, no vision, but just the ever ominous wall all around us. By this, walls can be foundations to speculative and unfounded myths the wall-maker chooses to write on them.

V: In your show “Terratorrial Piercings” at the gallery MO_space, you mentioned that land acts “as site, as territory, as form, as matter, and as an ideal." Can you delve into how the bricks have functioned in your work or how they evolve for different pictures? The camouflage and the maps, for instance, have borne some resemblance and have made homage to abstraction like HR Ocampo’s. 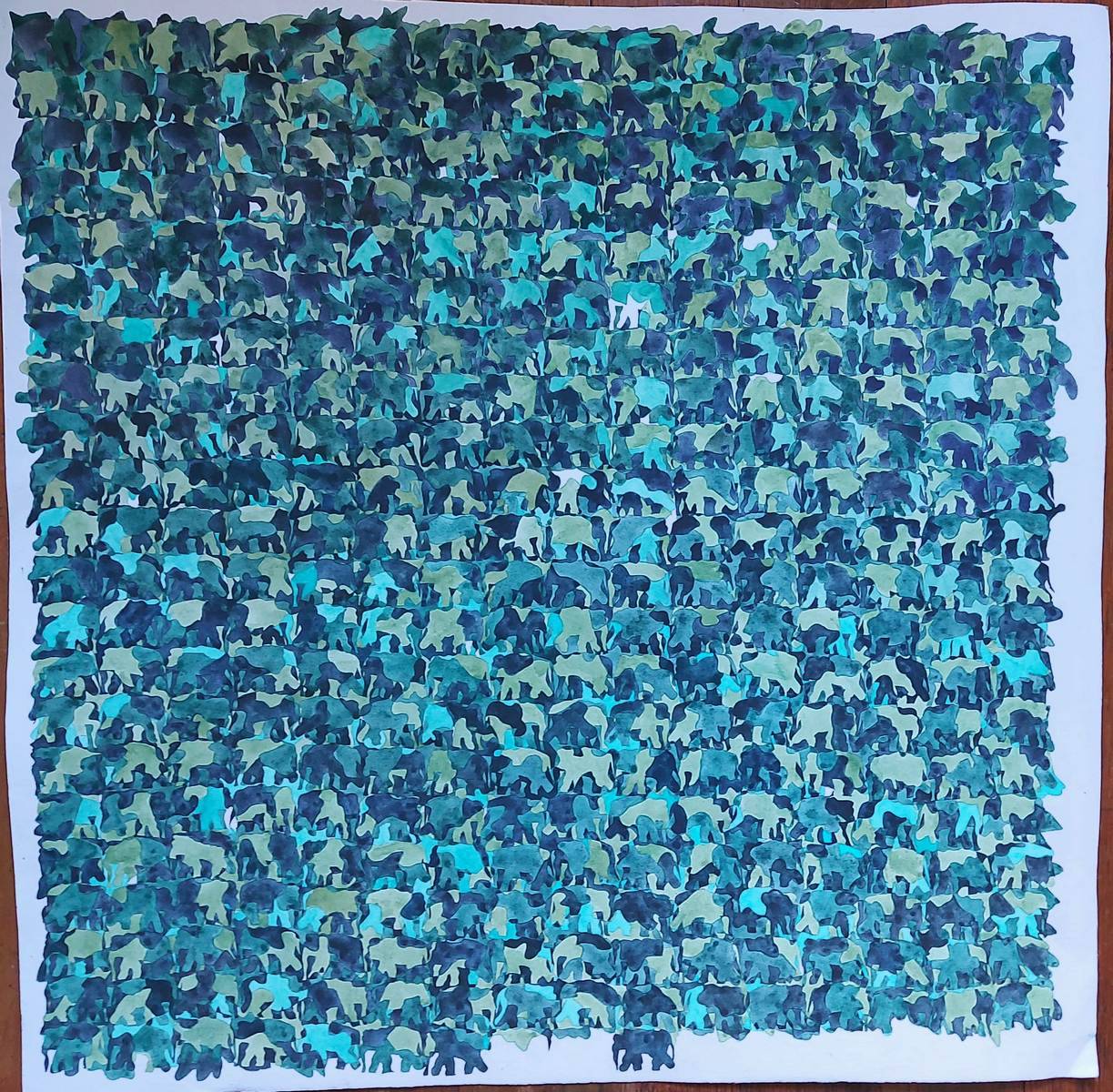 LC: I see the patterns in camouflage as units in themselves, like bricks they form more or less a uniform pattern. Like a puzzle, their forms are interlinked with one another. Hence, they define a particular kind of pictorial space, at the same time, it acts as a surface. They both define and cover up something, shape per shape, form per form. And yet camouflage directly connotes land probably because of its organicness and randomness.

When Marc (Gaba, he wrote about the show) and I were discussing about the show, he said something about usurping authorships of Maria Taniguchi and HR Ocampo and combining them in one work, as it implies authorship as something territorial. In a sense, I’m pissing on such authorial territorship or rather territorial authorship.

It’s also amazing to think how ownership/authorship comes into play with very basic forms, like can forms in themselves be privately owned or be singularly attributed to one person?

It also speaks of what I feel about the times we’re living in and the inherent violence that forms can take on when they’re wielded for a particular agenda. I guess I’m saying that forms are not really free of meaning nor are they completely detached from our world.

V: You suggested an awareness of and responsibility as an artist in the post-truth / fake news era in your artist talk with the Ateneo Art Gallery. For the group show “The Thing is” at Artery Art Space, you presented two watercolor paintings that have to do with surveillance and privacy. Can you tell us more about this work and their titles? 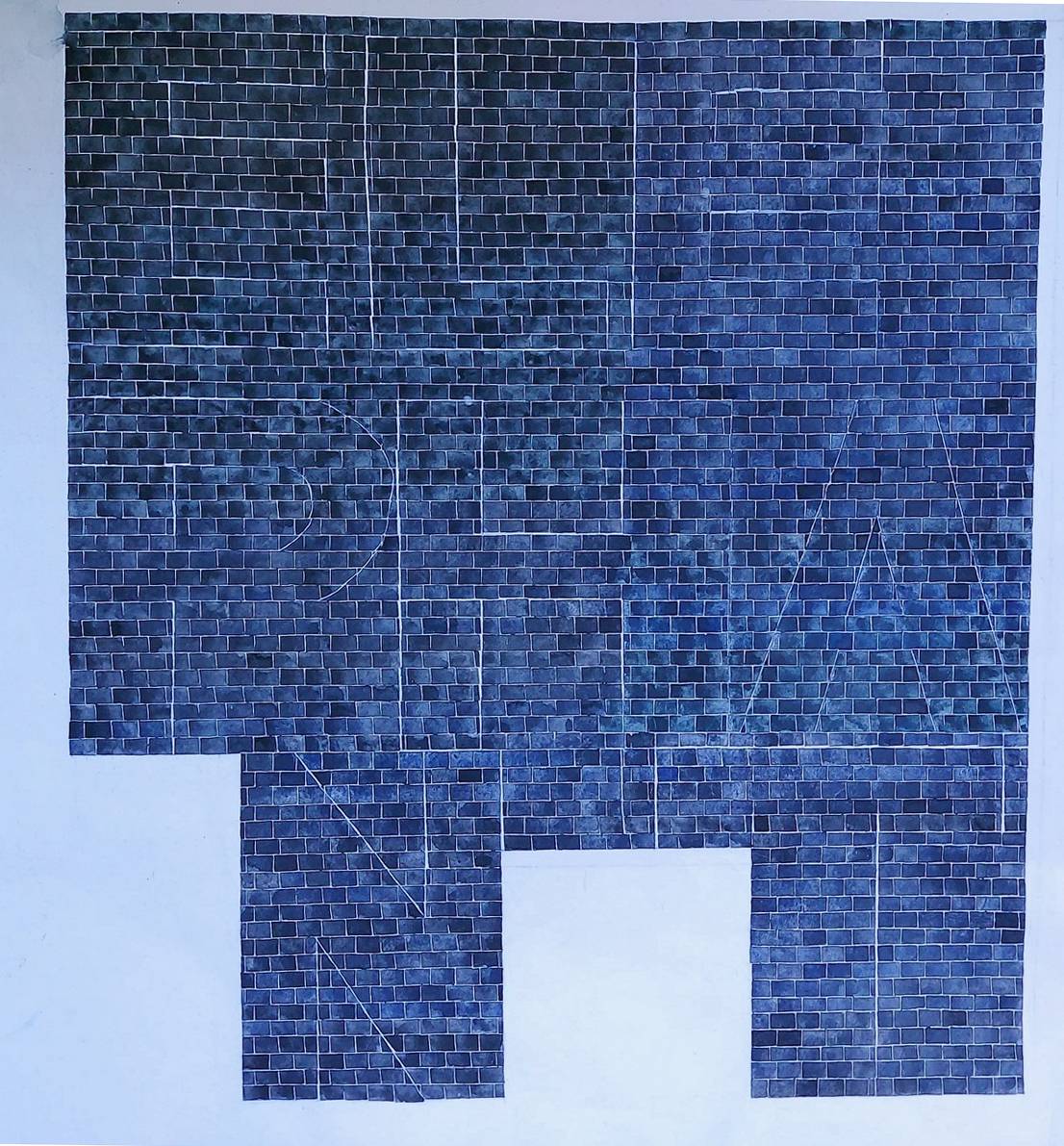 I have been listening to a podcast about how the CIA allegedly wrote The Scorpions song Winds of Change and how that song, and other soft propaganda influenced the breaking up of USSR in 1990 and Gorbachev’s policies of Perestroika and Glasnost. It is hilarious for its implausibility and yet it provided probable evidence from interviewees, retired intelligence officers named and unnamed, that it may in fact be true. 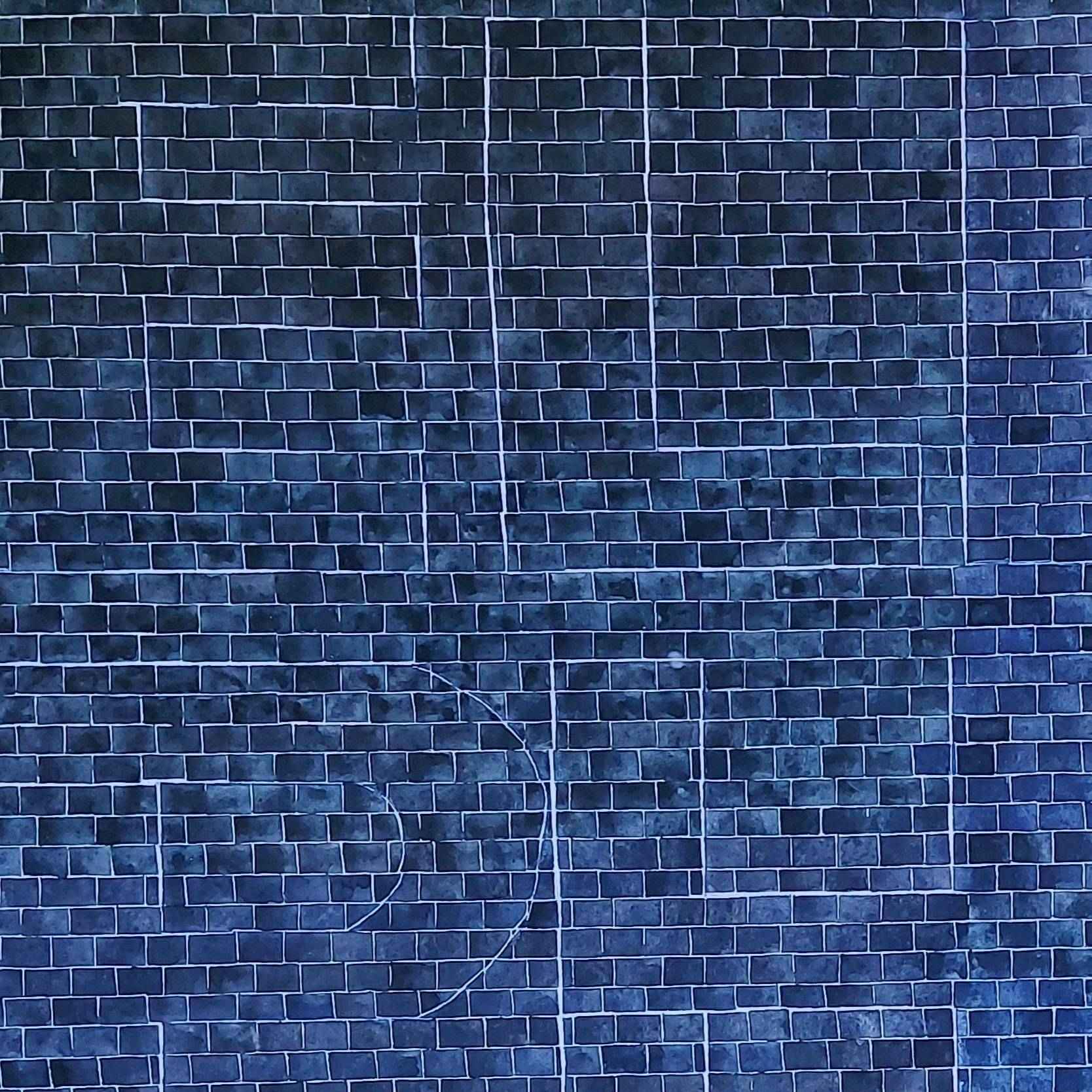 One prospective interviewee declined but sent a long letter and declared that he has seen the elephant. That really struck me, that phrase. What the hell did he mean by that? What is that elephant? We know and yet we don’t specifically know what that is. We can only speculate what that elephant is. Yet this phantom elephant is either being used to cover up another elephant which may not really be an elephant but a different animal altogether.

It may just really be just a large white sheet covering up propped pillows or debris to resemble what we assume as an elephant.

The Little Prince said it’s not a hat, but a snake that swallowed an elephant. Rousseau is still looking for elephants even when they have died out already and took out the tusk for their pianos.